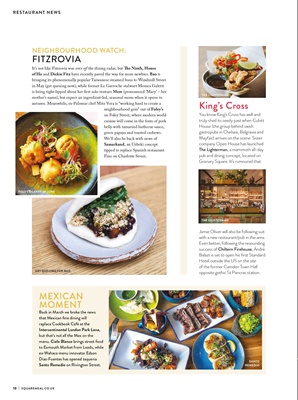 It's not like Fitzrovia was ever o ff the dining radar, but � e N i n t h , House

of Ho and Dickie Fitz have recently paved the way for more newbies. Bao is

in May (get queuing now), while former Le Gavroche stalwart Monica Galetti

mother's name), but expect an ingredient-led, seasonal menu when it opens in

neighbourhood gem" out of Foley's

on Foley Street, where modern world

cuisine will come in the form of pork

We'll also be back with news of

You know King's Cross has well and

truly shed its seedy past when Cubitt

House (the group behind swish

gastropubs in Chelsea, Belgravia and

Mayfair) arrives on the scene. Sister

The Lighterman, a mammoth all-day

pub and dining concept, located on

Granary Square. It's rumoured that

with a new restaurant/pub in the area.

Even better, following the resounding

Balazs is set to open his fi rst Standard

Hotel outside the US on the site

of the former Camden Town Hall

GET QUEUING FOR BAO

Back in March we broke the news

that Mexican fi ne dining will

replace Cookbook Café at the

but that's not all the Mex on the

to Exmouth Market from Leeds, while