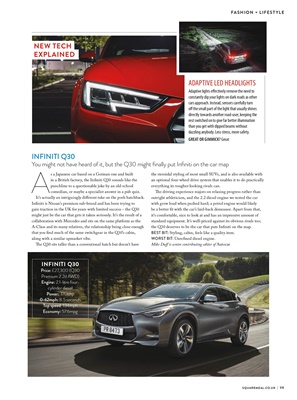 constantly dip your lights on dark roads as other

o� the small part of the light that usually shines

directly towards another road-user, keeping the

rest switched on to give far better illumination

than you get with dipped beams without

You might not have heard of it, but the Q30 might finally put Infiniti on the car map

As a Japanese car based on a German one and built

in a British factory, the Infiniti Q30 sounds like the

punchline to a questionable joke by an old-school

comedian, or maybe a specialist answer in a pub quiz.

It's actually an intriguingly different take on the posh hatchback.

Infiniti is Nissan's premium sub-brand and has been trying to

might just be the car that gets it taken seriously. It's the result of a

collaboration with Mercedes and sits on the same platform as the

A-Class and its many relatives, the relationship being close enough

that you find much of the same switchgear in the Q30's cabin,

along with a similar upmarket vibe.

�e Q30 sits taller than a conventional hatch but doesn't have

the steroidal styling of most small SUVs, and is also available with

everything its tougher-looking rivals can.

�e driving experience majors on relaxing progress rather than

outright athleticism, and the 2.2 diesel engine we tested the car

with grew loud when pushed hard; a petrol engine would likely

be a better fit with the car's laid-back demeanor. Apart from that,

it's comfortable, nice to look at and has an impressive amount of

standard equipment. It's well-priced against its obvious rivals too;

the Q30 deserves to be the car that puts Infiniti on the map.