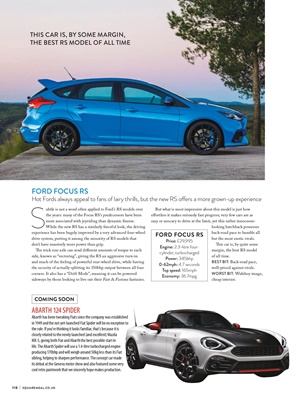 THIS CAR IS, BY SOME MARGIN,

THE BEST RS MODEL OF ALL TIME

the years: many of the Focus RS's predecessors have been

While the new RS has a similarly forceful look, the driving

experience has been hugely improved by a very advanced four-wheel

drive system, putting it among the minority of RS models that

side, known as "vectoring", giving the RS an aggressive turn-in

and much of the feeling of powerful rear-wheel drive, while having

the security of actually splitting its 350bhp output between all four

corners. It also has a "Drift Mode", meaning it can be powered

sideways by those looking to live out their Fast & Furious fantasies.

But what is most impressive about this model is just how

easy or unscary to drive at the limit, yet this rather innocuouslooking

back-road pace to humble all

but the most exotic rivals.

�is car is, by quite some

Abarth has been tweaking Fiats since the company was established

the rule. If you're thinking it looks familiar, that's because it is

closely related to the newly launched (and excellent) Mazda

MX-5, giving both Fiat and Abarth the best possible start in

life. The Abarth Spider will use a 1.4-litre turbocharged engine

producing 170bhp and will weigh around 50kg less than its Fiat

sibling, helping to sharpen performance. The concept car made