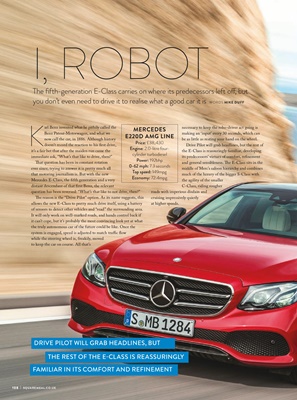 The fifth-generation E-Class carries on where its predecessors left o , but

you don't even need to drive it to realise what a good car it is WORDS MIKE DUFFI, ROBOT

arl Benz invented what he pithily called the

Benz Patent-Motorwagen, and what we

doesn't record the reaction to his first drive,

it's a fair bet that after the maiden run came the

�at question has been in constant rotation

ever since; trying to answer it is pretty much all

that motoring journalism is. But with the new

Mercedes E-Class, the fifth generation and a very

distant descendant of that first Benz, the relevant

question has been reversed: "What's that like to not drive, then?"

�e reason is the "Drive Pilot" option. As its name suggests, this

allows the new E-Class to pretty much drive itself, using a battery

of sensors to detect other vehicles and "read" the surrounding area.

It will only work on well-marked roads, and hands control back if

it can't cope, but it's probably the most convincing look yet at what

the truly autonomous car of the future could be like. Once the

system is engaged, speed is adjusted to match traffic flow

while the steering wheel is, freakily, moved

to keep the car on course. All that's

necessary to keep the robo-driver act going is

making an 'input' every 30 seconds, which can

be as little as resting your hand on the wheel.

Drive Pilot will grab headlines, but the rest of

the E-Class is reassuringly familiar, developing

its predecessors' virtues of comfort, refinement

and general sensibleness. �e E-Class sits in the

much of the luxury of the bigger S-Class with

the agility of the smaller

roads with imperious disdain and

DRIVE PILOT WILL GRAB HEADLINES, BUT

THE REST OF THE ECLASS IS REASSURINGLY

FAMILIAR IN ITS COMFORT AND REFINEMENT