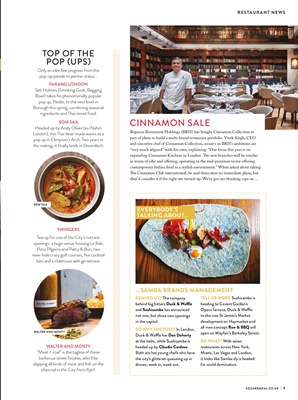 Only an elite few progress from the

pop up, Pestle, to the next level in

Headed up by Andy Oliver (ex-Nahm

London), this Thai diner made waves as a

pop up in Climpson's Arch. Two years in

the making, it finally lands in Shoreditch.

Tee up for one of the City's nuttiest

bars and a clubhouse with gin terrace.

"Meat + coal" is the tagline of these

slapping all kinds of meat and fish on the

charcoal in the City from April.

REMIND US? The company

and Sushisamba has announced

not one, but three new openings

SO WHY THE FUSS? In London,

at the helm, while Sushisamba is

headed up by Cláudio Cardoso.

Both are hot young chefs who have

the city's glitterati queueing up in

droves; week in, week out.

TELL US MORE Sushisamba is

to the new St James's Market

development on Haymarket and

SO WHAT? With seven

and executive chef of Cinnamon Collection, assures us BRH's ambitions are

"very much aligned" with his own, explaining: "Our focus this year is on

in terms of vibe and offering, operating in the mid-premium sector offering

contemporary Indian food in a stylish environment." When asked about taking

�e Cinnamon Club international, he said there were no immediate plans, but

they'd consider it if the right site turned up. We've got our thinking caps on…