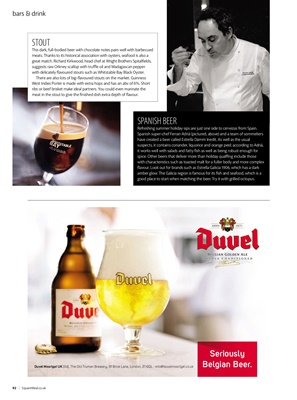 SPANISH BEERRefreshing summer holiday sips are just one side to cervezas from Spain.

Spanish super-chef Ferran Adrià (pictured, above) and a team of sommeliers

have created a beer called Estrella Damm Inedit. As well as the usual

suspects, it contains coriander, liquorice and orange peel; according to Adrià,

spice. Other beers that deliver more than holiday qua§ng include those

avour. Look out for brands such as Estrella Galicia 1906, which has a dark

amber glow. The Galicia region is famous for its sh and seafood, which is a

good place to start when matching the beer. Try it with grilled octopus.

meats. Thanks to its historical association with oysters, seafood is also a

with delicately avoured stouts such as Whitstable Bay Black Oyster.

There are also lots of big-avoured stouts on the market. Guinness

West Indies Porter is made with extra hops and has an abv of 6%. Short

ribs or beef brisket make ideal partners. You could even marinate the

meat in the stout to give the nished dish extra depth of avour.