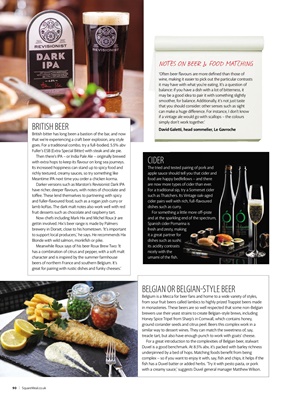 Belgium is a Mecca for beer fans and home to a wide variety of styles,

in monasteries. These beers are so well respected that some non-Belgian

brewers use their yeast strains to create Belgian-style brews, including

Honey Spice Tripel from Sharp's in Cornwall, which contains honey,

ground coriander seeds and citrus peel. Beers this complex work in a

similar way to dessert wines. They can match the sweetness of, say,

treacle tart, but also have enough punch to work with goats' cheese.

For a great introduction to the complexities of Belgian beer, stalwart

Duvel is a good benchmark. At 8.5% abv, it's packed with barley richness

underpinned by a bed of hops. Matching foods bene t from being

complex - so if you want to enjoy it with, say,  sh and chips, it helps if the

 sh has a Duvel batter or added herbs. 'Try it with pesto pasta, or pork

BRITISH BEERBritish bitter has long been a bastion of the bar, and now

that we're experiencing a craft beer explosion, any style

goes. For a traditional combo, try a full-bodied, 5.5% abv

with extra hops to keep its  avour on long sea journeys.

Its increased hoppiness can stand up to spicy food and

Meantime IPA next time you order a chicken korma.

have richer, deeper  avours, with notes of chocolate and

to ee. These lend themselves to partnering with spicy

and fuller- avoured food, such as a rogan josh curry or

fruit desserts such as chocolate and raspberry tart.

Now chefs including Mark Hix and Michel Roux Jr are

gettin involved. Hix's beer range is made by Palmers

brewery in Dorset, close to his hometown. 'It's important

to support local producers,' he says. He recommends Hix

Meanwhile Roux says of his beer Roux Brew Two: 'It

has a combination of citrus and pepper, with a soft malt

character and is inspired by the summer farmhouse

beers of northern France and southern Belgium. It's

great for pairing with rustic dishes and funky cheeses.'

wine, making it easier to pick out the particular contrasts

it may have with what you're eating. It's a question of

balance: if you have a dish with a lot of bitterness, it

may be a good idea to pair it with something slightly

smoother, for balance. Additionally, it's not just taste

that you should consider: other senses such as sight

can make a huge di erence. For instance, I don' t know

if a vintage ale would go with scallops - the colours

CIDERThe tried and tested pairing of pork and

apple sauce should tell you that cider and

food are happy bedfellows - and there

are now more types of cider than ever.

For a traditional sip, try a Somerset cider

such as Thatchers. Its Vintage oak-aged

dishes such as curry.

For something a little more o -piste

and at the sparkling end of the spectrum,

it a great partner for

dishes such as sushi;

umami of the  sh.