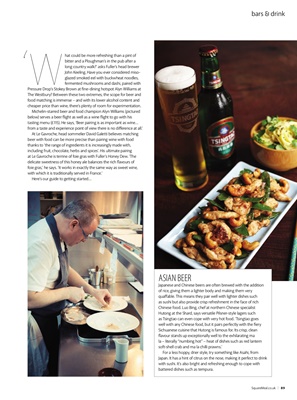 �What could be more refreshing than a pint of

bitter and a Ploughman's in the pub after a

John Keeling. Have you ever considered misoglazed

fermented mushrooms and dashi, paired with

The Westbury? Between these two extremes, the scope for beer and

food matching is immense - and with its lower alcohol content and

cheaper price than wine, there's plenty of room for experimentation.

from a taste and experience point of view there is no dierence at all.'

thanks to 'the range of ingredients it is increasingly made with,

including fruit, chocolate, herbs and spices'. His ultimate pairing

at Le Gavroche is terrine of foie gras with Fuller's Honey Dew. 'The

delicate sweetness of this honey ale balances the rich avours of

foie gras,' he says. 'It works in exactly the same way as sweet wine,

with which it is traditionally served in France.'

Here's our guide to getting started…

ASIAN BEERJapanese and Chinese beers are often brewed with the addition

of rice, giving them a lighter body and making them very

quaable. This means they pair well with lighter dishes such

Hutong at the Shard, says versatile Pilsner-style lagers such

as Tsingtao can even cope with very hot food. 'Tsingtao goes

well with any Chinese food, but it pairs perfectly with the ery

Sichuanese cuisine that Hutong is famous for. Its crisp, clean

avour stands up exceptionally well to the exhilarating ma

For a less hoppy, drier style, try something like Asahi, from

Japan. It has a hint of citrus on the nose, making it perfect to drink

with sushi. It's also bright and refreshing enough to cope with

battered dishes such as tempura.