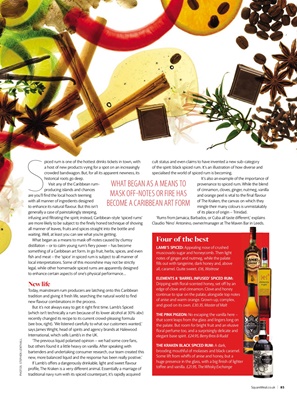 piced rum is one of the hottest drinks tickets in town, with

crowded bandwagon. But, for all its apparent newness, its

Visit any of the Caribbean rumproducing

with all manner of ingredients designed

to enhance its natural  avour. But this isn't

generally a case of painstakingly steeping,

infusing and  ltrating the spirit; instead, Caribbean-style 'spiced rums'

all manner of leaves, fruits and spices straight into the bottle and

waiting. Well, at least you can see what you're getting.

something of a Caribbean art form. In go fruit, herbs, spices, and even

local interpretations. Some of this moonshine may not be strictly

legal, while other homemade spiced rums are apparently designed

Today, mainstream rum producers are latching onto this Caribbean

tradition and giving it fresh life, searching the natural world to  nd

But it's not always easy to get it right  rst time. Lamb's Spiced

recently changed its recipe to its current crowd-pleasing formula

(see box, right). 'We listened carefully to what our customers wanted,'

International, which sells Lamb's in the UK.

'The previous liquid polarised opinion - we had some core fans,

but others found it a little heavy on vanilla. After speaking with

bartenders and undertaking consumer research, our team created this

new, more balanced liquid and the response has been really positive.'

pro le, The Kraken is a very di erent animal. Essentially a marriage of

traditional navy rum with its spiced counterpart, it's rapidly acquired

Four of the best

muscovado sugar and honeycomb. Then light

notes of ginger and nutmeg, while the palate

 lls out with tangerine, dark honey and, above

all, caramel. Quite sweet. £16, Waitrose

Dripping with  oral-scented honey, set o by an

edge of clove and cinnamon. Clove and honey

continue to spar on the palate, alongside top notes

THE PINK PIGEON: No escaping the vanilla here -

that scent leaps from the glass and lingers long on

the palate. But room for bright fruit and an elusive

 oral perfume too, and a surprisingly delicate and

Some lift from whi s of anise and honey, but a

huge presence in the glass, with a big  nish of lighter

of the spirit: black spiced rum. It's an illustration of how diverse and

specialised the world of spiced rum is becoming.

It's also an example of the importance of

provenance to spiced rum. While the blend

and orange peel is vital to the  nal  avour

of The Kraken, the canvas on which they

mingle their many colours is unmistakably

of its place of origin - Trinidad.

Claudio 'Nino' Antonino, owner/manager at The Maven Bar in Leeds.

WHAT BEGAN AS A MEANS TO

MASK OFF�NOTES OR FIRE HAS