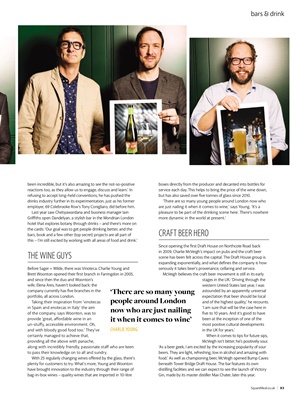 been incredible, but it's also amazing to see the not-so-positive

reactions too, as they allow us to engage, discuss and learn.' In

refusing to accept long-held conventions, he has pushed the

drinks industry further in its experimentation, just as his former

employer, 69 Colebrooke Row's Tony Conigliaro, did before him.

Gri¢ths open Dandelyan, a stylish bar in the Mondrian London

hotel that explores botany through drinks - and there's more on

the cards: 'Our goal was to get people drinking better, and the

bars, book and a few other (top secret) projects are all part of

this - I'm still excited by working with all areas of food and drink.'

Before Sager + Wilde, there was Vinoteca. Charlie Young and

Brett Woonton opened their �rst branch in Farringdon in 2005,

and since then the duo and Woonton's

company currently has �ve branches in the

portfolio, all across London.

Taking their inspiration from 'vinotecas

in Spain and enotecas in Italy' the aim

of the company, says Woonton, was to

provide 'great, aordable wine in an

and with bloody good food too.' They've

certainly managed to achieve that,

providing all the above with panache,

along with incredibly friendly, passionate sta who are keen

to pass their knowledge on to all and sundry.

With 25 regularly changing wines oered by the glass, there's

plenty for customers to try. What's more, Young and Woonton

have brought innovation to the industry through their range of

boxes directly from the producer and decanted into bottles for

service each day. This helps to bring the price of the wine down,

but has also saved over �ve tonnes of glass since 2010.

'There are so many young people around London now who

are just nailing it when it comes to wine,' says Young. 'It's a

pleasure to be part of the drinking scene here. There's nowhere

more dynamic in the world at present.'

Since opening the �rst Draft House on Northcote Road back

in 2009, Charlie McVeigh's impact on pubs and the craft beer

scene has been felt across the capital. The Draft House group is

expanding exponentially, and what de�nes the company is how

McVeigh believes the craft beer movement is still in its early

stages in the UK: 'Driving through the

astounded by an apparently universal

expectation that beer should be local

and of the highest quality,' he recounts.

'I am sure that will be the case here in

been at the inception of one of the

in the UK for years.'

When it comes to tips for future sips,

'As a beer geek, I am excited by the increasing popularity of sour

beers. They are light, refreshing, low in alcohol and amazing with

beneath Tower Bridge Draft House. The bar features its own

Gin, made by its master distiller Max Chater, later this year.

'There are so many young

now who are just nailing

it when it comes to wine'