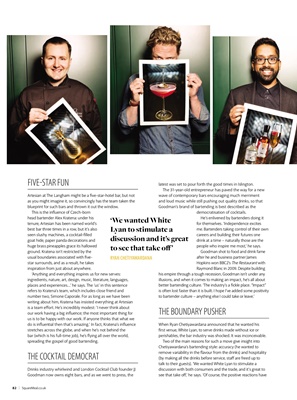 Artesian at The Langham might be a �ve-star-hotel bar, but not

as you might imagine it, so convincingly has the team taken the

blueprint for such bars and thrown it out the window.

This is the inuence of Czech-born

head bartender Alex Kratena: under his

tenure, Artesian has been named world's

best bar three times in a row, but it's also

ground. Kratena isn't restricted by the

surrounds, and as a result, he takes

inspiration from just about anywhere.

'Anything and everything inspires us for new serves:

places and experiences…' he says. The 'us' in this sentence

refers to Kratena's team, which includes close friend and

number two, Simone Caporale. For as long as we have been

writing about him, Kratena has insisted everything at Artesian

is a team eort. He's incredibly modest: 'I never think about

our work having a big inuence; the most important thing for

us is to be happy with our work. If anyone thinks that what we

stretches across the globe, and when he's not behind the

bar (which is his full-time job), he's ying all over the world,

spreading the gospel of good bartending.

Goodman now owns eight bars, and as we went to press, the

latest was set to pour forth the good times in Islington.

and loud music while still pushing out quality drinks, so that

Goodman's brand of bartending is best described as the

He's enlivened by bartenders doing it

for themselves. 'Independence excites

me. Bartenders taking control of their own

careers and building their futures one

drink at a time - naturally those are the

people who inspire me most,' he says.

after he and business partner James

Hopkins won BBC2's The Restaurant with

Raymond Blanc in 2009. Despite building

his empire through a tough recession, Goodman isn't under any

illusions, and when it comes to making an impact, he's all about

is often lost faster than it is built. I hope I've added some positivity

to bartender culture - anything else I could take or leave.'

When Ryan Chetiyawardana announced that he wanted his

�rst venue, White Lyan, to serve drinks made without ice or

perishables, the bar industry was shocked. It was inconceivable.

remove variability in the avour from the drinks) and hospitality

(by making all the drinks before service, sta are freed up to

talk to their guests). 'We wanted White Lyan to stimulate a

discussion with both consumers and the trade, and it's great to

see that take o,' he says. 'Of course, the positive reactions have

Lyan to stimulate a

discussion and it's great

to see that take off'