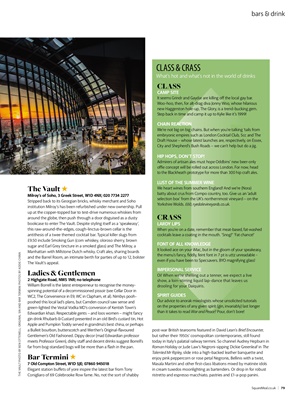 What's hot and what's not in the world of drinks

It seems Grindr and Gaydar are killing o the local gay bar.

Woo-hoo, then, for alt-drag diva Jonny Woo, whose hilarious

We're not big on big chains. But when you're talking 'tails from

embryonic empires such as London Cocktail Club, 5cc and The

Draft House - whose latest launches are, respectively, on Essex,

City and Shepherd's Bush Roads - we can't help but do a jig.

o e concept will be rolled out across London. For now, head

to the Blackheath prototype for more than 300 hip craft ales.

LUST OF THE SUMMER WINE

We heart wines from southern England! And we're (Nora)

batty about crus from Compo country, too. Give us an 'adult

selection box' from the UK's northernmost vineyard - on the

When you're on a date, remember that meat-based, fat-washed

cocktails leave a coating in the mouth. 'Snog?' 'Fat chance!'

FONT OF ALL KNOWLEDGE

It looked ace on your iMac, but in the gloom of your speakeasy,

even if you have been to Specsavers. BYO magnifying glass!

Oi! When we're shelling out a tenner, we expect a live

show, a loin-stirring liquid lap-dance that leaves us

drooling for your Daiquiris.

Our advice to anorak mixologists whose unsolicited tutorials

on the properties of any given spirit (gin, invariably) last longer

than it takes to read War and Peace? Pour, don't bore!

Stripped back to its Georgian bricks, whisky merchant and Soho

institution Milroy's has been refurbished under new ownership. Pull

around the globe, then push through a door disguised as a dusty

bookcase to enter The Vault. Despite styling itself as a 'speakeasy',

sugar and Earl Grey tincture in a smoked glass) and The Milroy, a

and the Barrel Room, an intimate berth for parties of up to 12, bolster

William Borrell is the latest entrepreneur to recognise the moneyspinning

potential of a decommissioned pissoir (see Cellar Door in

this local lad's plans, but Camden council saw sense and

far from bog-standard bogs will be more than a ¢ ash in the pan.

Conigliaro of 69 Colebrooke Row fame. No, not the sort of shabby

but rather their 1950s' cosmopolitan contemporaries, still found

Roman Holiday or Jude Law's Negroni-sipping Dickie Greenleaf in The

Talented Mr Ripley, slide into a high-backed leather banquette and

Masala Martini and other  rst-class libations mixed by matinée idols

in cream tuxedos moonlighting as bartenders. Or drop in for robust