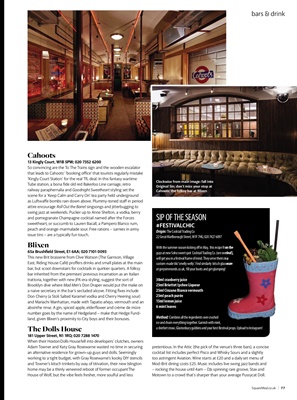 'Kingly Court Station' for the real TfL deal. In this fantasy wartime

as Luftwa e bombs rain down above. Plummy-toned sta in period

attire encourage Roll Out the Barrel singsongs and jitterbugging to

swing jazz at weekends. Pucker up to Anne Shelton, a vodka, berry

and pomegranate Champagne cocktail named after the Forces

sweetheart, or succumb to Lauren Bacall, a Pampero Blanco rum,

This new Brit brasserie from Clive Watson (The Garrison, Village

bar, but scoot downstairs for cocktails in quirkier quarters. A folksy

bar inherited from the premises' previous incarnation as an Italian

trattoria, together with new JFK-era styling, suggest the sort of

a naive secretary in the bar's secluded alcove. Fitting  xes include

and Mariachi Manhattan, made with Tapatio añejo, vermouth and an

number goes by the name of Hedgeland - make that Hedge Fundland,

given Blixen's proximity to City boys and their bonuses.

When their Hoxton Dolls House fell into developers' clutches, owners

an alternative residence for grown-up guys and dolls. Seemingly

and Towner's kitsch trinkets by way of titivation, their new Islington

home may be a thinly veneered reboot of former occupant The

House of Wolf, but the vibe feels fresher, more soulful and less

SIP OF THE SEASON

With the summer season kicking o� in May, this recipe from the

will get you in a festival frame of mind. They serve theirs in a

at greysimmonds.co.uk, � ll your boots and get glamping!

Method: Combine all the ingredients over crushed

ice and churn everything together. Garnish with mint,

a sherbet straw, Glastonbury gubbins and your best Bestival props. Upload to Instagram!

pretentious. In the Attic (the pick of the venue's three bars), a concise

too astringent Aviation. Wine starts at £20 and a daily set menu of

- rocking the house until 4am - DJs spinning rare groove, Stax and

Motown to a crowd that's sharper than your average Pussycat Doll.

Clockwise from main image: fall into

Cahoots; the folksy bar at Blixen

With the summer season kicking o� in May, this recipe from the

will get you in a festival frame of mind. They serve theirs in a