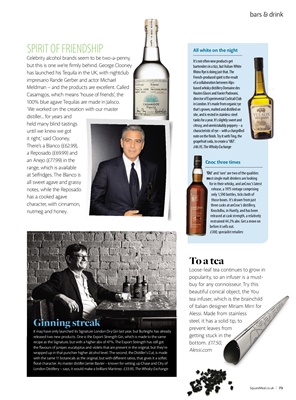 but this is one we're  rmly behind. George Clooney

has launched his Tequila in the UK, with nightclub

Meldman - and the products are excellent. Called

Casamigos, which means 'house of friends', the

100% blue agave Tequilas are made in Jalisco.

'We worked on the creation with our master

distiller... for years and

until we knew we got

range, which is available

at Selfridges. T he Blanco is

all sweet agave and grassy

notes, while the Reposado

has a cooked agave

It may have only launched its Signature London Dry Gin last year, but Burleighs has already

released two new products. One is the Export Strength Gin, which is made to the same

recipe as the Signature, but with a higher abv of 47%. The Export Strength has still got

the  avours of juniper, eucalyptus and violets that are present in the original, but they're

wrapped up in that punchier higher alcohol level. The second, the Distiller's Cut, is made

with the same 11 botanicals as the original, but with di erent ratios, that gives it a softer,

 oral character. As master distiller Jamie Baxter - known for setting up Chase and City of

London Distillery - says, it would make a brilliant Martinez. £33.95, The Whisky Exchange

All white on the night

It's not often new products get

bartenders in a tizz, but Vulson White

Rhino Rye is doing just that. The

French-produced spirit is the result

of a collaboration between Alpsbased

in London. It's made from organic rye

that's grown, malted and distilled on

site, and is rested in stainless-steel

tanks for a year. It's slightly sweet and

citrusy, and unmistakably peppery - a

characteristic of rye - with a chargrilled

note on the finish. Try it with Ting, the

grapefruit soda, to create a 'V&T'.

'Old' and 'rare' are two of the qualities

most single malt drinkers are looking

for in their whisky, and anCnoc's latest

those boxes. It's drawn from just

Knockdhu, in Huntly, and has been

released at cask strength, a relatively

before it sells out.

'Old' and 'rare' are two of the qualities

most single malt drinkers are looking

Loose-leaf tea continues to grow in

popularity, so an infuser is a mustbuy

for any connoisseur. Try this

beautiful conical object, the You

tea infuser, which is the brainchild

of Italian designer Miriam Mirri for

Alessi. Made from stainless

steel, it has a solid tip, to

getting stuck in the