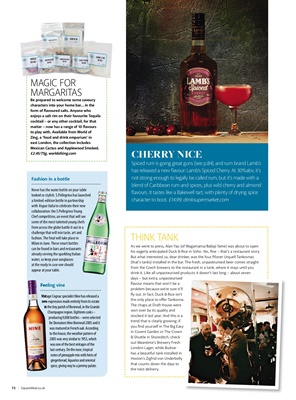 has released a new flavour: Lamb's Spiced Cherry. At 30%abv, it's

not strong enough to legally be called rum, but it's made with a

blend of Caribbean rum and spices, plus wild cherry and almond

flavours. It tastes like a Bakewell tart, with plenty of drying spice

Be prepared to welcome some savoury

characters into your home bar… in the

form of  avoured salts. Anyone who

enjoys a salt rim on their favourite Tequila

cocktail - or any other cocktail, for that

to play with. Available from World of

Zing, a 'food and drink emporium' in

As we went to press, Alan Yau (of Wagamama/Babaji fame) was about to open

But what interested us, dear drinker, was the four Pilsner Urquell Tankovnas

from the Czech brewery to the restaurant in a tank, where it stays until you

drink it. Like all unpasteurised products it doesn't last long - about seven

problem because we're sure it'll

the only place to o er Tankovna.

The chaps at Draft House were

won over by its quality and

stocked it last year. And this is a

trend that is clearly growing: if

you � nd yourself in The Big Easy

in Covent Garden or The Crown

has a beautiful tank installed in

that counts down the days to

the only place to o er Tankovna.

Fashion in a bottle

Never has the water bottle on your table

looked so stylish. s.pellegrino has launched

a limited-edition bottle in partnership

with Vogue Italia to celebrate their new

Chef competition, an event that will see

some of the most talented young chefs

from across the globe battle it out in a

challenge that will mix taste, art and

fashion. The final will take place in

Milan in June. These smart bottles

can be found in bars and restaurants

water, so keep your sunglasses

at the ready in case one should

appear at your table.

new expression made entirely from its estate

in the tiny parish of Bonneuil, in the Grande

for Domaines Hine Bonneuil 2005 and it

was matured in French oak. According

to the house, the weather pattern of

was one of the best vintages of the

last century. On the nose, tropical

notes of pineapple mix with hints of

new expression made entirely from its estate

in the tiny parish of Bonneuil, in the Grande