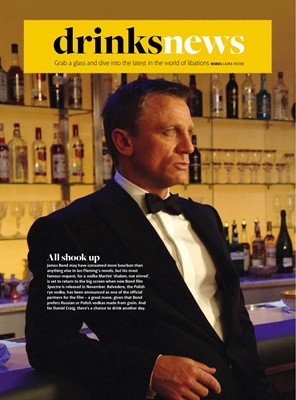 70 | squaremeal.co.uk drinksnewsGrab a glass and dive into the latest in the world of libations WORDS LAURA FOSTER

James Bond may have consumed more bourbon than

anything else in Ian Fleming's novels, but his most

famous request, for a vodka Martini 'shaken, not stirred',

Spectre is released in November. Belvedere, the Polish

rye vodka, has been announced as one of the official

partners for the film - a great move, given that Bond

prefers Russian or Polish vodkas made from grain. And

for Daniel Craig, there's a chance to drink another day.