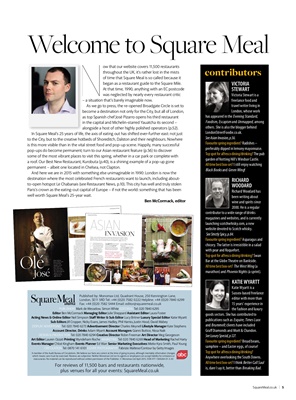 throughout the UK, it's rather lost in the mists

of time that Square Meal is so called because it

began as a restaurant guide to the Square Mile.

At that time, 1990, anything with an EC postcode

was neglected by nearly every restaurant critic

As we go to press, the re-opened Broadgate Circle is set to

become a destination not only for the City, but all of London,

in the capital and Michelin-starred Yauatcha its second -

alongside a host of other highly polished operators (p.52).

In Square Meal's 25 years of life, the axis of eating out has shifted ever-further east: not just

to the City, but to the creative hotbeds of Shoreditch, Dalston and their neighbours. Nowhere

is this more visible than in the vital street food and pop-up scene. Happily, many successful

pop-ups do become permanent; turn to our Asian restaurant feature (p.56) to discover

some of the most vibrant places to visit this spring, whether in a car park or complete with

a roof. Our Best New Restaurant, Kurobuta (p.40), is a shining example of a pop-up gone

permanent - albeit one located in Chelsea, not Clapton.

And here we are in 2015 with something else unimaginable in 1990: London is now the

destination where the most celebrated French restaurants want to launch, including aboutto-open

Paris's crown as the eating-out capital of Europe - if not the world: something that has been

Victoria Stewart is a

has appeared in the Evening Standard,

Foodism, Escapism and Unmapped, among

wine and spirits since

contributor to a wide range of drinks

magazines and websites, and is currently

chicory. The latter is irresistible in a salad

with pear and Roquefort.

Bar at the Globe Theatre on Bankside.

All time best box-set? The West Wing (a

marathon) and Phoenix Nights (a sprint).

editor with more than

the fashion and luxury

goods sectors. She has contributed to

publications such as Esquire, Times Luxx

and Brummell; clients have included

samphire - and Easter eggs, of course!

is, dare I say it, better than Breaking Bad.

to London. What prompted a move to a

country that most of the world still thought

of as serving some of the worst food in

Europe? 'I just wanted to see something else,'

Pizarro says. 'The great thing about being a

chef is that, if you have the technique, you

can work anywhere in the world. A friend told

me there weren't many Spanish chefs in the

UK and that there was a gap in the market. So

Pizarro took a job as a sous chef at Gaudi in

Clerkenwell, at that time the most innovative

Spanish restaurant in London. But while

innovation may have been the name of the

game in Spain, in the UK, attitudes to Spanish

food were still shaped by holidays on the

Costas. Pizarro has been on a mission to

change that perception ever since.

osé Pizarro talks about the

importance of other people more

than any chef I have ever met. He has

open kitchens because he thinks it's

important that his customers can see

their food being prepared by people

who enjoy their work. And he's about to open

a new restaurant in the City so he can allow

his trusted team of chefs to take on new

challenges - 'otherwise I will lose them'.

This emphasis on the human aspect of

cooking is tting for a chef most famous for

the shareable nature of his food. 'The most

important thing in life is to spend quality time

together,' Pizarro says, 'and there is nothing

better for that than being around food.'

Pizarro was born in 1971 in Talaván, a small

village in Extremadura in western Spain, a

region the chef makes sound like some sort of

earthly paradise. 'We have almost everything

in Extremadura. There is so much land,

and the vegetables are incredible. We have

amazing lamb and game. There are very good

restaurants and this year the city of Cáceres

has been named Spain's gastronomy capital.'

But this isn't the usual story of a chef who

started cooking because he was inspired by

the abundance of produce growing around

him. True, Pizarro's dad was a farmer and it

was young José's job to help him on the farm,

but the kitchen was the undisputed domain

of his mother and grandmother.

It was not until he was training to become

a dental technician that he began to cook. 'I

did very well in my studies and while I was

looking for a job, I started doing a cookery

course - and I loved it. A chef from Fonda San

Juan restaurant in Cáceres asked if I'd like to

do some work for him. I never went back to

being a dental technician.'

It was a move to Madrid that gave Pizarro

his big break, working for Julio Reoyo at

Mesón Doña Filo. 'I went to a hotel restaurant

because I needed to know big numbers -

Julio Reoyo was a very good mentor. He

taught me so much and introduced me to so

Spain in the late 1990s was emerging as a

gastronomic force to be reckoned with - and

yet in 1998, Pizarro upped sticks and moved Olé After wowing

the City by storm.

The chef reveals all

'THE GREAT THING ABOUT BEING A CHEF IS THAT, IF YOU HAVE

THE TECHNIQUE, YOU CAN WORK ANYWHERE IN THE WORLD'

Clockwise from left: a dish of milk-fed leg of Castilian lamb; woodpanelled

the coming weeks, if you choose

to join a restaurant queue in, let's

you're in with a chance of being

high probability that you could also nd

yourself in Thailand, Vietnam or Malaysia,

too, with stop-o�s in Spain and India.

If you're a Londoner with your wits about

you and eyes on the restaurant scene, you'll

know that this city is chock-a-block with new

of food inspired by the southern and eastern

parts of Asia. If you're an eater on the move,

There's a new and exciting breed of restaurant taking over the capital's streets,

adding a touch of the west to cuisines from the east, and introducing London's

of Busan BBQ's burgers from your must-try

Of course, if you're a TwEATer you'll

have got wind of the fact that the Young

team @bao_london has just opened its

own restaurant, Bao, on Lexington Street

in Soho, with backing from Michelin-starred

yet? Then dip into Bó Drake on Greek Street,

which opened in February, serving baos,

kimchee quesadillas and other eastern

fare at Jinjuu in Kingly Street, or

potato and soba-ko fries at

Kurobuta on the King's Road.

And since we're naming

restaurants to visit ASAP, has

MUCH OF THE OBSESSION WITH

SALTY, CRUNCHY � HAS GROWN OUT

OF THE STREET FOOD MOVEMENT

Above: summer rolls from Hanoi Kitchen. Opposite page, from left to right: tonkotsu

barbecue feast from Smoking Goat; the Bao team and one of their Taiwanese buns