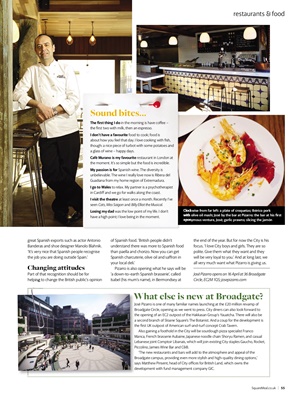 the job you are doing outside Spain.'

Part of that recognition should be for

understand there was more to Spanish food

than paella and chorizo. Now you can get

Pizarro is also opening what he says will be

Isabel (his mum's name), in Bermondsey at

the end of the year. But for now the City is his

focus. 'I love City boys and girls. They are so

polite. Give them what they want and they

will be very loyal to you.' And at long last, we

all very much want what Pizarro is giving us.

What else is new at Broadgate?

What else is new at Broadgate?

Broadgate Circle, opening as we went to press. City diners can also look forward to

the opening of an EC2 outpost of the Hakkasan Group's Yauatcha. There will also be

a second branch of Sloane Square's The Botanist. And a coup for the development is

the  rst two with milk, then an espresso.

I don't have a favourite food to cook; food is

about how you feel that day. I love cooking with  sh,

though: a nice piece of turbot with some potatoes and

a glass of wine - happy days.

Café Murano is my favourite restaurant in London at

the moment. It's so simple but the food is incredible.

My passion is for Spanish wine. The diversity is

unbelievable. The wine I really love now is Ribera del

Guadiana from my home region of Extremadura.

I go to Wales to relax. My partner is a psychotherapist

in Cardi© and we go for walks along the coast.

I visit the theatre at least once a month. Recently I've

Losing my dad was the low point of my life. I don't

have a high point; I love being in the moment.