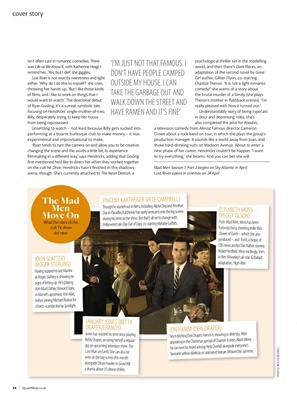 was Life as We Know It, with Katherine Heigl, I

Lost River is not exactly sweetness and light

either. 'Why do I do this to myself?' she cries,

throwing her hands up. 'But I like those kinds

of  lms, and I like to work on things that I

would want to watch.' The directorial debut

of Ryan Gosling, it's a surreal, symbolic tale,

Unsettling to watch - not least because Billy gets sucked into

performing at a bizarre burlesque club to make money - it was

experimental and improvisational to make.

'Ryan tends to turn the camera on and allow you to be creative,

changing the scene and the words a little bit, to experience

 rst mentioned he'd like to direct her when they worked together

on the cult hit Drive. Hendricks hasn't  nished in this shadowy

arena, though. She's currently attached to The Neon Demon, a

psychological thriller set in the modelling

world, and then there's Dark Places, an

adaptation of the second novel by Gone

Charlize Theron. 'It is not a light romantic

comedy!' she warns of a story about

the brutal murder of a family (she plays

really pleased with how it turned out.'

Understandably wary of being typecast

in dour and depressing roles, she's

also completed the pilot for Roadies,

Crowe about a rock band on tour, in which she plays the group's

production manager. It sounds like a world away from Joan, and

those hard-drinking suits on Madison Avenue. About to enter a

new phase of her career, Hendricks couldn't be happier. 'I want

to try everything,' she beams. And you can bet she will.

'I'M JUST NOT THAT FAMOUS. I

OUTSIDE MY HOUSE. I CAN

TAKE THE GARBAGE OUT AND

WALK DOWN THE STREET AND

HAVE RAMEN AND IT'S FINE'

Since ditching Don Draper, Hamm is showing us diversity. After

appearing in the Christmas special of Channel 4 series Black Mirror,

he can next be heard voicing Herb Overkill alongside everyone's

Having supped his last Martini

as Roger, Slattery is showing no

signs of letting up. He's playing

before joining Michael Keaton for

Post-Mad Men, Moss has been

Queen of Earth - which she also

produced - and Truth, a biopic of

Jones has wasted no time since playing

Betty Draper, securing herself a regular

gig on upcoming television show The

Last Man on Earth. She can also be

seen on the big screen this month

alongside Ethan Hawke in Good Kill,

a drama about US drone strikes.

Though he started out in � lms, including Alpha Dog and Another

Day in Paradise, Kartheiser has rarely ventured onto the big screen

during his time on the show. But that's all set to change with

Move OnWhat the stars of the