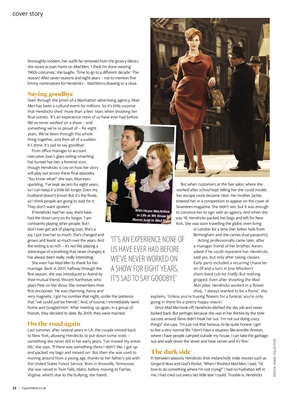 thoroughly modern, her outt far removed from the groovy fabrics

she wears as Joan Harris on Mad Men. 'I think I'm done wearing

reason? After seven seasons and eight years - not to mention ve

Emmy nominations for Hendricks - Mad Men is drawing to a close.

Seen through the prism of a Manhattan advertising agency, Mad

Men has been a cultural event for millions. So it's little surprise

that Hendricks shed 'more than a few' tears when shooting her

nal scenes. 'It's an experience none of us have ever had before.

We've never worked on a show - and

something we're so proud of - for eight

years. We've been through this whole

thing together, and then all of a sudden

has turned her into a feminist icon,

though Hendricks is coy on how her story

will play out across these nal episodes.

'You know what?' she says, blue eyes

so I can keep it a little bit longer. Even my

husband doesn't know! But it's the nale,

so I think people are going to wait for it.

If Hendricks had her way, she'd have

had the show carry on for longer. 'I am

constantly playing other people. But I

don't ever get sick of playing Joan. She's a

joy, I just love her so much. She's changed and

grown and learnt so much over the years. And

the writing is so rich - it's not like playing a

stereotype of something that never changes; it

has always been really, really interesting.'

She even has Mad Men to thank for her

marriage. Back in 2007, halfway through the

rst season, she was introduced to Arend by

their mutual friend, Vincent Kartheiser, who

plays Pete on the show. She remembers their

rst encounter. 'He was charming, funny and

very magnetic. I got his number that night, under the pretence

that "we could just be friends". And, of course, I immediately went

home and Googled him.' After meeting up again, in a group of

friends, they decided to date. By 2009, they were married.

On the road again

Last summer, after several years in LA, the couple moved back

to New York, allowing Hendricks to put down some roots -

something she never did in her early years. 'I've moved my entire

life,' she says. 'If there was something there I didn't like, I got up

and packed my bags and moved on.' But then she was used to

moving around from a young age, thanks to her father's job with

she was raised in Twin Falls, Idaho, before moving to Fairfax,

Virginia, which, due to the bullying, she hated.

But when customers at the hair salon where she

worked after school kept telling her she could model,

entered her in a competition to appear on the cover of

Seventeen magazine. She didn't win, but it was enough

to convince her to sign with an agency. And when she

was 18, Hendricks packed her bags and left for New

York. She was soon travelling the globe, even living

in London for a time (her father hails from

Birmingham and she carries dual passports).

a manager friend of her brother, Aaron,

asked if he could represent her. Hendricks

said yes, but only after taking classes.

on ER and a turn in Joss Whedon's

short-lived cult hit Fire�y. But nothing

gripped. Even after shooting the Mad

shop. 'I always wanted to be a ¬orist,' she

explains. 'Unless you're buying ¬owers for a funeral, you're only

going in there for a pretty happy reason.'

looked back. But perhaps because she was in her thirties by the time

success arrived, fame didn't freak her out. 'I'm not out doing crazy

things!' she says. 'I'm just not that famous, to be quite honest. I get

to live a very normal life. I don't have a situation like Jennifer Aniston,

where I have people camped outside my house. I can take the garbage

out and walk down the street and have ramen and it's ne.'

In between seasons, Hendricks shot melancholic indie movies such as

love to do something where I'm not crying!" I had no hydration left in

me, I had cried out every last little tear I could.' Trouble is, Hendricks

'IT'S AN EXPERIENCE NONE OF

US HAVE EVER HAD BEFORE.

A SHOW FOR EIGHT YEARS,

IT'S SAD TO SAY GOODBYE'

in Life as We Know It.

Above: Joan in Mad Men