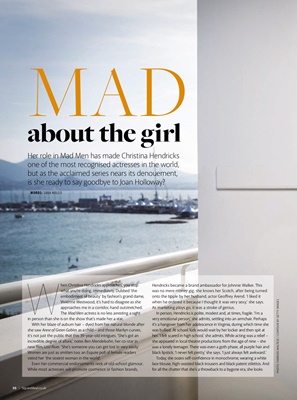 Her role in Mad Men has made Christina Hendricks

one of the most recognised actresses in the world,

but as the acclaimed series nears its denouement,

is she ready to say goodbye to Joan Holloway?

When Christina Hendricks approaches, you stop

what you're doing. Immediately. Dubbed 'the

Vivienne Westwood, it's hard to disagree as she

approaches me in a corridor, hand outstretched.

The Mad Men actress is no less arresting a sight

in person than she is on the show that's made her a star.

she saw Anne of Green Gables as a child - and those Marilyn curves,

it's not just the public that this 39-year-old intrigues. 'She's got an

incredible degree of allure,' notes Ben Mendelsohn, her co-star in

new  lm, Lost River. 'She's someone you can get lost in very easily.'

Women are just as smitten too; an Esquire poll of female readers

voted her 'the sexiest woman in the world'.

Even her commercial endorsements reek of old-school glamour.

While most actresses will promote cosmetics or fashion brands,

Hendricks became a brand ambassador for Johnnie Walker. This

was no mere money gig; she knows her Scotch, after being turned

onto the tipple by her husband, actor Geo rey Arend. 'I liked it

when he ordered it because I thought it was very sexy,' she says.

As marketing ploys go, it was a stroke of genius.

In person, Hendricks is polite, modest and, at times, fragile. 'I'm a

very emotional person,' she admits, settling into an armchair. Perhaps

it's a hangover from her adolescence in Virginia, during which time she

was bullied. At school, kids would wait by her locker and then spit at

her. 'I felt scared in high school,' she admits. While acting was a relief -

was a lonely teenager. There was even a goth phase, all purple hair and

Today, she oozes self-con dence in monochrome, wearing a white

for all the chatter that she's a throwback to a bygone era, she looks