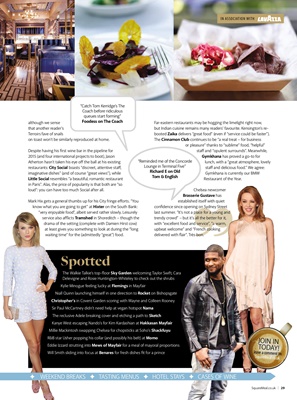 Far-eastern restaurants may be hogging the limelight right now,

Zaika delivers "great food" (even if "service could be faster").

The Cinnamon Club continues to be "a real treat - for business

or pleasure" thanks to "sublime" food, "helpful"

Gymkhana has proved a go-to for

lunch, with a "great atmosphere, lovely

sta and delicious food." We agree:

Gymkhana is currently our BMW

Restaurant of the Year.

established itself with quiet

last summer. "It's not a place for a young and

trendy crowd" - but it's all the better for it,

with "excellent food and service", "a warm,

on toast won't be similarly reproduced at home.

Despite having his  rst wine bar in the pipeline for

Atherton hasn't taken his eye o the ball at his existing

imaginative dishes" (and of course "great views"), while

in Paris". Alas, the price of popularity is that both are "so

loud": you can have too much Social after all.

Mark Hix gets a general thumbs up for his City fringe e orts. "You

know what you are going to get" at Hixter on the South Bank:

service also a icts Tramshed in Shoreditch - though the

drama of the setting (complete with Damien Hirst cow)

at least gives you something to look at during the "long

Foodess on The Coach

"Reminded me of the Concorde

Delevigne and Rosie Huntington-Whiteley to check out the shrubs

Niall Quinn launching himself in one direction to Rocket on Bishopsgate

Christopher's in Covent Garden scoring with Wayne and Colleen Rooney

The reclusive Adele breaking cover and etching a path to Sketch