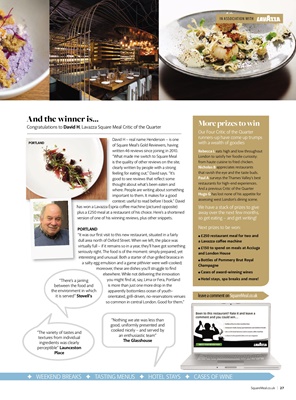 of Square Meal's Gold Reviewers, having

"What made me switch to Square Meal

is the quality of other reviews on the site,

clearly written by people with a strong

feeling for eating out," David says. "It's

good to see reviews that re ect some

thought about what's been eaten and

where. People are writing about something

important to them. It makes for a good

context: useful to read before I book." David

has won a Lavazza Èspria co ee machine (pictured opposite)

plus a £250 meal at a restaurant of his choice. Here's a shortened

version of one of his winning reviews, plus other snippets.

"It was our  rst visit to this new restaurant, situated in a fairly

dull area north of Oxford Street. When we left, the place was

virtually full - if it remains so in a year, they'll have got something

seriously right. The food is of the moment: simply prepared, yet

interesting and unusual. Both a starter of char-grilled brassica in

a salty egg emulsion and a game pithivier were well-cooked;

moreover, these are dishes you'll struggle to  nd

elsewhere. While not delivering the innovation

you might  nd at, say, Lima or Fera, Portland

is more than just one more drop in the

so common in central London. Good for them."

Our Four Critic of the Quarter

runners-up have come up trumps

with a wealth of goodies

London to satisfy her foodie curiosity:

from haute cuisine to fried chicken.

that ravish the eye and the taste buds.

And a previous Critic of the Quarter

Hugo G has lost none of his appetite for

We have a stack of prizes to give

away over the next few months,

so get eating - and get writing!

Next prizes to be won:

£250 restaurant meal for two and

And the winner is…

"Nothing we ate was less than

cooked nicely - and served by

"The variety of tastes and

between the food and

the environment in which

it is served" Stovell's

has won a Lavazza Èspria co ee machine (pictured opposite)

version of one of his winning reviews, plus other snippets.