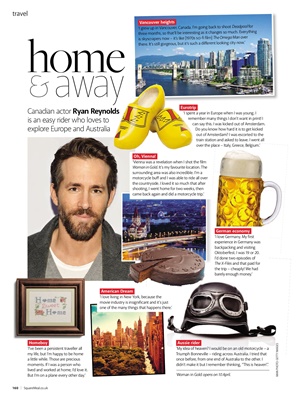 is an easy rider who loves to

Woman in Gold opens on 10 April.

'I grew up in Vancouver, Canada. I'm going back to shoot Deadpool for

three months, so that'll be interesting as it changes so much. Everything

there. It's still gorgeous, but it's such a different looking city now.'

'I spent a year in Europe when I was young. I

remember many things I don't want in print! I

can say this. I was kicked out of Amsterdam.

Do you know how hard it is to get kicked

out of Amsterdam? I was escorted to the

train station and asked to leave. I went all

over the place - Italy, Greece, Belgium.'

'Vienna was a revelation when I shot the film

Woman in Gold. It's my favourite location. The

motorcycle buff and I was able to ride all over

the countryside. I loved it so much that after

shooting, I went home for two weeks, then

came back again and did a motorcycle trip.'

'I love Germany. My first

experience in Germany was

I'd done two episodes of

The X-Files and that paid for

the trip - cheaply! We had

'I've been a persistent traveller all

my life, but I'm happy to be home

a little while. Those are precious

moments. If I was a person who

lived and worked at home, I'd love it.

But I'm on a plane every other day.'

'My idea of heaven? I would be on an old motorcycle - a

Triumph Bonneville - riding across Australia. I tried that

once before, from one end of Australia to the other. I

didn't make it but I remember thinking, "This is heaven".'

'I love living in New York, because the

movie industry is insignificant and it's just

one of the many things that happens there.'