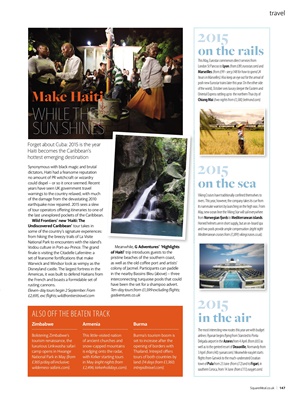 National Park in May (from

of ancient churches and

is edging onto the radar,

in May (eight nights from

set to increase after the

opening of borders with

tours of both countries by

ALSO OFF THE BEATEN TRACK

Synonymous with black magic and brutal

dictators, Haiti had a fearsome reputation

no amount of PR witchcraft or wizardry

could dispel - or so it once seemed. Recent

warnings to the country relaxed, with much

of the damage from the devastating 2010

of tour operators o� ering itineraries to one of

the last unexplored pockets of the Caribbean.

some of the country's signature experiences:

from hiking the breezy trails of La Visite

National Park to encounters with the island's

Vodou culture in Port-au-Prince. The grand

 nale is visiting the Citadelle Laferrière: a

Warwick and Windsor look as wimpy as the

Disneyland castle. The largest fortress in the

Americas, it was built to defend Haitians from

the French and boasts a formidable set of

Viking Cruises have traditionally confined themselves to

rivers. This year, however, the company takes its cue from

its namesake warriors by launching on the high seas. From

May, new ocean liner the Viking Star will sail everywhere

from Norwegian fjords to Mediterranean islands.

Horned helmets are in short supply, but an on-board spa

The most interesting new routes this year are with budget

Delgada airport in the Azores from 4 April (from £65) as

well as to the genteel resort of Deauville, Normandy from

flights from Gatwick to the much-underrated Croatian

This May, Eurostar commences direct services from

London St Pancras to Lyon (from £89; eurostar.com) and

hours in Marseilles). Also keep an eye out for the arrival of

posh new Eurostar trains later this year. On the other side

of the world, October sees luxury sleeper the Eastern and

Oriental Express rattling up to the northern Thai city of

of Haiti' trip introduces guests to the

pristine beaches of the southern coast,

as well as the old co� ee port and artists'

colony of Jacmel. Participants can paddle

in the nearby Bassins Bleu (above) - three

interconnecting turquoise pools that could

have been the set for a shampoo advert.