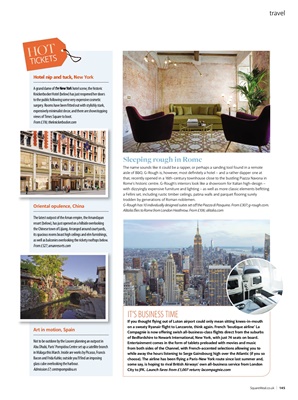 A grand dame of the New York hotel scene, the historic

Knickerbocker Hotel (below) has just reopened her doors

to the public following some very expensive cosmetic

surgery. Rooms have been fitted out with stylishly stark,

expensively minimalist decor, and there are showstopping

views of Times Square to boot.

The latest outpost of the Aman empire, the Amandayan

resort (below), has just opened on a hillside overlooking

the Chinese town of Lijiang. Arranged around courtyards,

as well as balconies overlooking the rickety rooftops below.

Not to be outdone by the Louvre planning an outpost in

in Málaga this March. Inside are works by Picasso, Francis

Bacon and Frida Kahlo; outside you'll find an imposing

of Bedfordshire to Newark International, New York, with just 74 seats on board.

from both sides of the Channel, with French-accented selections allowing you to

choose). The airline has been  ying a Paris-New York route since last summer and,

some say, is hoping to rival British Airways' own all-business service from London

A grand dame of the New York hotel scene, the historic

Knickerbocker Hotel (below) has just reopened her doors

The name sounds like it could be a rapper, or perhaps a sanding tool found in a remote

aisle of BQ. G-Rough is, however, most de nitely a hotel - and a rather dapper one at

that, recently opened in a 16th-century townhouse close to the bustling Piazza Navona in

trodden by generations of Roman noblemen.

Alitalia ies to Rome from London Heathrow. From £106; alitalia.com