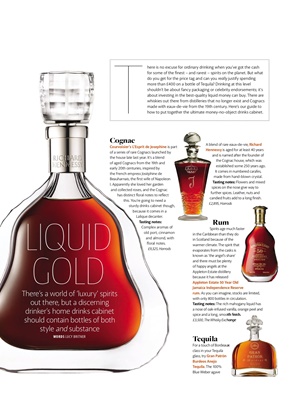 of a series of rare Cognacs launched by

the house late last year. It's a blend

of aged Cognacs from the 19th and

Beauharnais, the   rst wife of Napoleon

I. Apparently she loved her garden

and collected roses, and the Cognac

has distinct   oral notes to re  ect

this. You're going to need a

because it comes in a

A blend of rare eaux-de-vie, Richard

Hennessy is aged for at least 40 years

and is named after the founder of

the Cognac house, which was

established some 250 years ago.

It comes in numbered carafes,

made from hand-blown crystal.

spices on the nose give way to

in the Caribbean than they do

in Scotland because of the

warmer climate. The spirit that

evaporates from the casks is

and there must be plenty

of happy angels at the

because it has released

rum. As you can imagine, stocks are limited,

with only 800 bottles in circulation.

a nose of oak-infused vanilla, orange peel and

spice and a long, smooth   nish.

For a touch of Bordeaux

class in your Tequila

There's a world of 'luxury' spirits

out there, but a discerning

should contain bottles of both

for some of the   nest - and rarest - spirits on the planet. But what

more than £400 on a bottle of Tequila? Drinking at this level

shouldn't be about fancy packaging or celebrity endorsements; it's

about investing in the best-quality liquid money can buy. There are

whiskies out there from distilleries that no longer exist and Cognacs

made with eaux-de-vie from the 19th century. Here's our guide to

how to put together the ultimate money-no-object drinks cabinet.

spice and a long, smooth   nish.

For a touch of Bordeaux