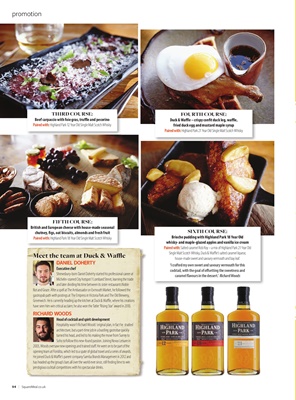 'I crafted my own sweet and savoury vermouth for this

cocktail, with the goal of o� setting the sweetness and

and later dividing his time between its sister restaurants Noble

Rot and Graze. After a spell at The Ambassador on Exmouth Market, he followed the

gastropub path with postings at The Empress in Victoria Park and The Old Brewery,

Greenwich. He is currently heading up the kitchen at Duck & Wa� e, where his creations

have seen him win critical acclaim; he also won the Tatler 'Rising Star' award in 2013.

Head of cocktail and spirit development

architecture, but a part-time job in a bustling gastrobar quickly

turned his head, and led to his making the move from Surrey to

Soho to follow this new-found passion. Joining Novus Leisure in

2003, Woods oversaw new openings and trained sta� . He went on to be part of the

opening team at Floridita, which led to a spate of global travel and a series of awards.

has headed up the group's bars all over the world ever since, still � nding time to win