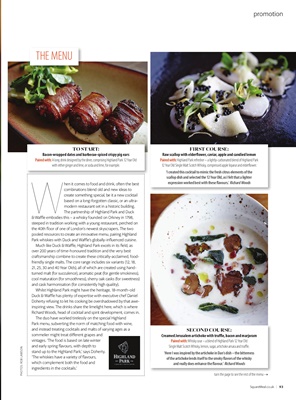 hen it comes to food and drink, often the best

create something special, be it a new cocktail

based on a long-forgotten classic, or an ultramodern

restaurant set in a historic building.

The partnership of Highland Park and Duck

steeped in tradition working with a young restaurant, perched on

the 40th  oor of one of London's newest skyscrapers. The two

Much like Duck  Wa e, Highland Park excels in its  eld, as

over 200 years of time-honoured tradition and the very best

Doherty refusing to let his cooking be overshadowed by that aweinspiring

view. The drinks share the limelight here, which is where

Richard Woods, head of cocktail and spirit development, comes in.

The duo have worked tirelessly on the special Highland

Park menu, subverting the norm of matching food with wine,

and instead treating cocktails and malts of varying ages as a

vintages. 'The food is based on late winter

and early spring  avours, with depth to

stand up to the Highland Park,' says Doherty.

'The whiskies have a variety of  avours,

which complement both the food and

ingredients in the cocktails.'

with either ginger and lime, or soda and lime, for example.

scallop dish and selected the 12 Year Old, as I felt that a lighter

and really does enhance the � avour.' Richard Woods

turn the page to see the rest of the menu ➝