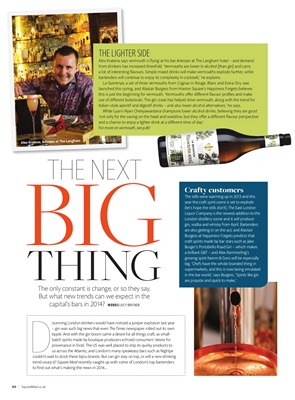 The only constant is change, or so they say.

But what new trends can we expect in the

tipple. And with the gin boom came a desire for all things craft, as smallbatch

spirits made by boutique producers echoed consumers' desire for

provenance in food. The US was well placed to ship its quirky products to

us across the Atlantic, and London's many speakeasy bars such as Nightjar

couldn't wait to stock these bijou brands. But can gin stay on top, or will a new drinking

trend usurp it? Square Meal recently caught up with some of London's top bartenders

from drinkers has increased threefold. 'Vermouths are lower in alcohol [than gin] and carry

bartenders will continue to enjoy its complexity in cocktails,' he explains.

La Quintinye, a set of three vermouths from Cognac in Rouge, Blanc and Extra-Dry, was

use of di erent botanicals. The gin craze has helped drive vermouth, along with the trend for

'not only for the saving on the head and waistline, but they o er a di erent  avour perspective

and a chance to enjoy a lighter drink at a di erent time of day.'

For more on vermouth, see p.80

The stills were warming up in 2013 and this

year the craft spirit scene is set to explode

Liquor Company is the newest addition to the

London distillery scene and it will produce

are also getting in on the act, and Alastair

Burgess at Happiness Forgets predicts that

craft spirits made by bar stars such as Jake

big. 'Chefs have the whole branded thing in

supermarkets, and this is now being emulated

in the bar world,' says Burgess. 'Spirits like gin

are popular and quick to make.'

Alex Kratena, Artesian at The Langham