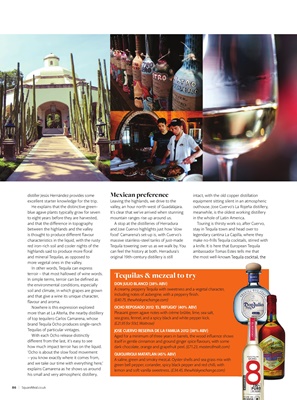 excellent starter knowledge for the trip.

He explains that the distinctive greenblue

to eight years before they are harvested,

and that the di erence in topography

between the highlands and the valley

characteristics in the liquid, with the rusty

red iron-rich soil and cooler nights of the

and mineral Tequilas, as opposed to

more vegetal ones in the valley.

In other words, Tequila can express

terroir - that most hallowed of wine words.

In simple terms, terroir can be de ned as

soil and climate, in which grapes are grown

and that give a wine its unique character,

Nowhere is this expression explored

more than at La Alteña, the nearby distillery

of top tequilero Carlos Camarena, whose

With each Ocho release distinctly

di erent from the last, it's easy to see

how much impact terroir has on the liquid.

'Ocho is about the slow food movement

- you know exactly where it comes from,

and we take our time with everything here,'

explains Camarena as he shows us around

his small and very atmospheric distillery.

Leaving the highlands, we drive to the

valley, an hour north-west of Guadalajara.

It's clear that we've arrived when stunning

mountain ranges rise up around us.

A stop at the distilleries of Herradura

Tequila towering over us as we walk by. You

can feel the history at both. Herradura's

intact, with the old copper distillation

equipment sitting silent in an atmospheric

meanwhile, is the oldest working distillery

in the whole of Latin America.

Touring is thirsty work so, after Cuervo,

stay in Tequila town and head over to

legendary cantina La Capilla, where they

a knife. It is here that European Tequila

ambassador Tomas Estes tells me that

the most well-known Tequila cocktail, the

A creamy, peppery Tequila with sweetness and a vegetal character,

including notes of aubergine, with a peppery  nish.

Aged for a minimum of three years in barrels, the wood in uence shows

itself in gentle cinnamon and ground ginger spice  avours, with some

A saline, green and smoky mezcal. Oyster shells and sea grass mix with

the most well-known Tequila cocktail, the