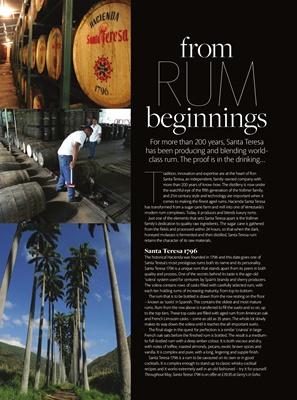 radition, innovation and expertise are at the heart of Ron

more than 200 years of know-how. The distillery is now under

the watchful eye of the �fth generation of the Vollmer family,

and 21st-century style and technology are important when it

from the �elds and processed within 24 hours, so that when the dark,

honeyed molasses is fermented and then distilled, Santa Teresa rum

retains the character of its raw materials.

Santa Teresa's most prestigious rums both its name and its personality.

quality and process. One of the secrets behind its taste is the age-old

The solera contains rows of casks �lled with carefully selected rum, with

each tier holding rums of increasing maturity, from top to bottom.

- known as 'suelo' in Spanish. This contains the oldest and most mature

rums. Rum from the row above is transferred to �ll the suelo and so on, up

to the top tiers. These top casks are �lled with aged rum from American oak

and French Limousin casks - some as old as 35 years. The whole lot slowly

makes its way down the solera until it reaches the all-important suelo.

French oak vats before the �nished rum is bottled. The result is a medium-

to full-bodied rum with a deep amber colour. It is both viscous and dry,

vanilla. It is complex and pure, with a long, lingering and supple �nish.

cocktails. It is complex enough to stand up to classic whisky cocktail

recipes and it works extremely well in an old fashioned - try it for yourself.

Throughout May, Santa Teresa 1796 is on o

For more than 200 years, Santa Teresa

has been producing and blending worldclass

rum. The proof is in the drinking…