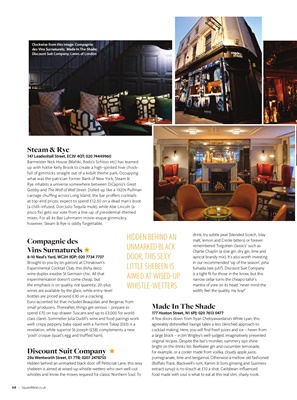 of gimmicks straight out of a kidult theme park. Occupying

what was the patrician former Bank of New York, Steam 

Gatsby and The Wolf of Wall Street. Dolled up like a 1920s Pullman

(a chilli-infused, Don Julio Tequila mule), while Abe Lincoln (a

mixes. For all its Baz Luhrmann movie-esque gimmickry,

however, Steam  Rye is oddly forgettable.

Brought to you by les garcons at Chinatown's

the emphasis is on quality, not quantity: 20-plus

wines are available by the glass, while entry-level

bottles are priced around £30 on a cracking

well: crispy peppery baby squid with a Furmint Tokaji (£63) is a

whistles and know the moves required for classic Northern Soul. To

remembered 'forgotten classics' such as

in our recommended 'sip of the season', piña

is a tight t for those in the know, but this

mantra of yore on its head: 'never mind the

width; feel the quality, my boy!'

Made In The Shade

A few doors down from Ryan Chetiyawardana's White Lyan, this

cocktail making. Here, you will nd fresh juices and ice - hewn from

bright on the drinks list: Beefeater gin and cucumber lemonade,

for example, or a cooler made from vodka, cloudy apple juice,

extract syrup) is no slouch at £10 a shot. Caribbean-in¦uenced

food made with soul is what to eat at this real slim, shady nook.

Clockwise from this image: Compagnie

des Vins Surnaturels; Made In The Shade;