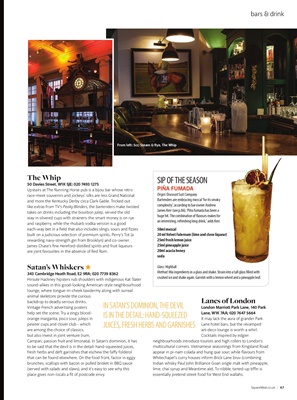 and more the Kentucky Derby circa Clark Gable. Tricked out

like extras from TV's Peaky Blinders, the bartenders make twisted

takes on drinks including the bourbon julep, served the old

way in silvered cups with strainers: the smart money is on rye

and raspberry, while the rhubarb vodka version is a good

each-way bet in a eld that also includes slings, sours and zzes

built on a judicious selection of premium spirits. Perry's Tot (a

are joint favourites in the absence of Red Rum.

sound-alikes in this good-looking American-style neighbourhood

lounge, where tongue-in-cheek taxidermy along with surreal

pewter cups and clover club - which

are among the choice of classics,

Campari, passion fruit and limonata). In Satan's dominion, it has

to be said that the devil is in the detail: hand-squeezed juices,

fresh herbs and deft garnishes that eschew the fa¡y folderol

that can be found elsewhere. On the food front, factor in eggy

brunches, scallops with bacon or pulled brisket in BBQ sauce

(served with salads and slaws), and it's easy to see why this

SIP OF THE SEASON

Bartenders are embracing mezcal 'for its smoky

complexity', according to bar owner Andrew

huge hit. The combination of �avours makes for

Method: Mix ingredients in a glass and shake. Strain into a tall glass �lled with

crushed ice and shake again. Garnish with a lemon wheel and a pineapple leaf.

It may lack the aura of grander Park

Lane hotel bars, but the revamped

art-deco lounge is worth a whirl.

appear in pi-nam colada and hung que sour; while ¦avours from

IN SATAN'S DOMINION, THE DEVIL

IS IN THE DETAIL: HAND�SQUEEZED