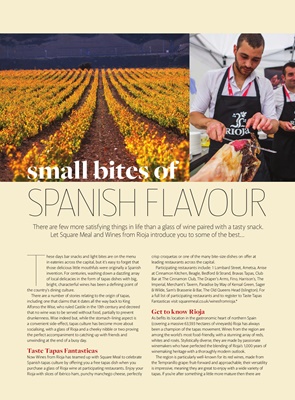 These days bar snacks and light bites are on the menu

in eateries across the capital, but it's easy to forget that

those delicious little mouthfuls were originally a Spanish

invention. For centuries, washing down a dazzling array

of local delicacies in the form of tapas dishes with big,

bright, characterful wines has been a dening point of

There are a number of stories relating to the origin of tapas,

Alfonso the Wise, who ruled Castile in the 13th century and decreed

that no wine was to be served without food, partially to prevent

drunkenness. Wise indeed but, while the stomach-lining aspect is

a convenient side-eect, tapas culture has become more about

socialising, with a glass of Rioja and a cheeky nibble or two proving

the perfect accompaniment to catching up with friends and

unwinding at the end of a busy day.

purchase a glass of Rioja wine at participating restaurants. Enjoy your

leading restaurants across the capital.

Bar at The Cinnamon Club, The Draper's Arms, Fino, Harrison's, The

Get to know Rioja

(covering a massive 63,593 hectares of vineyards) Rioja has always

been a champion of the tapas movement. Wines from the region are

among the world's most food-friendly, with a stunning array of reds,

whites and rosés. Stylistically diverse, they are made by passionate

winemakers who have perfected the blending of Rioja's 1,000 years of

The region is particularly well-known for its red wines, made from

the Tempranillo grape: fruit-forward and approachable, their versatility

is impressive, meaning they are great to enjoy with a wide variety of

tapas. If you're after something a little more mature then there are

There are few more satisfying things in life than a glass of wine paired with a tasty snack.