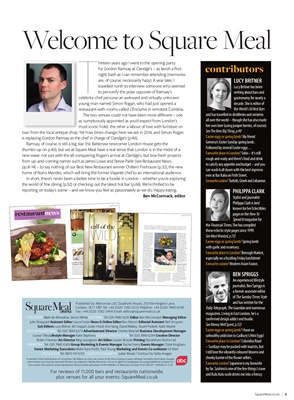 season's BMW Square Meal Best New Restaurant. This isn't a case of us

being blinded by the stardust of celebrity sightings: here is a restaurant

that's been an unquali­ed hit with customers and critics alike. 'Chiltern

Firehouse seems to be a successful venture,' a beaming Mendes agreed

with typical understatement. 'We're very happy to have won. It's good for

the whole team to reap the awards, we've all worked a lot of hours.'

Barnyard each shows the biggest names on the restaurant scene ­zzing

with new ideas, while Polpetto is a welcome return to Soho for chef

But the combination of a London-based Portuguese chef with a

does best: a glamorous take on inuences from all around the world.

congratulates Nuno Mendes on his award

Wareing has had a capital idea. Late last

month he relaunched his two-Michelinstarred

restaurant at The Berkeley hotel after

an extensive refurbishment, changing its

name to MARCUS, rejigging the menu, and

making it more relaxed in the process. Food

(pictured) is described as 'modern European

with British inuence'. Wareing, who runs

The Gilbert Scott at St. Pancras, has also

announced plans for another, more casual

will open on Upper St Martin's Lane in

July, serving dishes with an international

inuence, but made using almost entirely

British produce. It takes its name from the

Mystery and will be overseen by Marcus

take the all-important step from chef

to restaurateur, following in the footsteps

of other Ramsay-raised chefs Jason Atherton

Hawksmoor is to open a fifth

restaurant in June, on Yeoman's

For the latest news, views and industry

@squaremeal and find all our new

the space was formerly occupied by Cotidie. Like their other sites, it will take grand

European cafés as a reference point and it is said to evoke early 20th-century Vienna.

European wine list, of which the vast majority will be available by the glass and carafe.

It will join the duo's other venues Colbert in Chelsea, Brasserie Zédel at Piccadilly

Circus, The Delaunay on Aldwych and The Wolseley on Piccadilly. Fischer's follows

Thirteen years ago I went to the opening party

for Gordon Ramsay at Claridge's - as lavish a  rstnight

bash as I can remember attending (memories

are, of course, necessarily hazy). A year later, I

travelled north to interview someone who seemed

to personify the polar opposite of Ramsay's

young man named Simon Rogan, who had just opened a

The two venues could not have been more di erent - one

as sumptuously appointed as you'd expect from London's

most iconic hotel, the other a labour of love with furniture on

loan from the local antique shop. Yet how times change: here we are in 2014, and Simon Rogan

is replacing Gordon Ramsay as the chef in charge of Claridge's (p.46).

Ramsay, of course, is still a big star (his Battersea newcomer London House gets the

thumbs-up on p.40), but we at Square Meal have a real sense that London is in the midst of a

new wave: not just with the all-conquering Rogan's arrival at Claridge's, but box-fresh projects

from up-and-coming names such as James Lowe and Stevie Parle (see Restaurant News,

pp.8-14) - to say nothing of our Best New Restaurant winner Chiltern Firehouse (p.32), the new

home of Nuno Mendes, which will bring the former Viajante chef to an international audience.

In short, there's never been a better time to be a foodie in London - whether you're exploring

reporting on today's scene - and we know you feel as passionately as we do. Happy eating.

Lucy Britner has been

writing about bars and

gastronomy for nearly a

decade. She is editor of

and has travelled to distilleries and wineries

all over the world - though she has also made

her own beer (using juniper berries, of course).

rough and ready and there's food and drink

to satisfy any appetite and budget - and you

can wash it all down with the best espresso

ever at Bar Italia on Frith Street.

pages in the How To

Spend It magazine for

the Financial Times. She has compiled

these eclectic style pages since 1999.

with garlic and rosemary.

especially on a bustling Friday lunchtime!

of The Sunday Times Style

and has written for the

Daily Telegraph, The Guardian and numerous

Easter eggs or spring lamb? I have an

- Sundays may be packed with tourists, but

I still love the vibrantly coloured blooms and

cheeky banter of the � ower sellers.

Favourite cuisine? Japanese is my favourite

by far. Sashimi is one of the few things I crave

and Kulu Kulu sushi drives me into a frenzy.

inaccuracies. No material can be reproduced without written permission of the Publisher. © Monomax Ltd April 2014. ISSN 977-136926editor@squaremeal.co.ukiews of 11,000 bars and restaurants nationwide,

plus venues for all your events: squaremeal.co.uk

With six restaurants, two Michelin stars and a host of other awards to his name, it's fair to

say that Simon Rogan has made his mark, but he believes his highly anticipated London

had opened. 'What we've got

chef told me, 'is an opportunity

to put Cartmel on the national

map.' It seemed a fanciful claim.

Not only did Rogan's restaurantwith-rooms

have a sta  of just

�ve, it was situated in a Cumbrian

tourist trail and where the only

gastronomic claim to fame was

of awards - including two

the country making a pilgrimage

to south Cumbria, most famously

Steve Coogan and Rob Brydon in

and around Cartmel: as well as

L'Enclume, he owns the more

farm that supplies as much

produce as possible for his

and low for L'Enclume's more

The French and Mr Cooper's Garden. He ran

the two-year pop-up Roganic in Marylebone

him return to London to pull o  his biggest

coup to date: opening Fera in the dining

at Claridge's. It's as impressive a restaurant

portfolio as any chef in the UK can lay claim

to - and vindication of Rogan's original vision.

'Putting Cartmel on the national map is

what I always set out to do, but I never knew

if I was going to achieve that or not,' Rogan

tells me 12 years after our �rst conversation.

'In life you can only do what you're good at,

and you hope that maybe one day you'll get

rewarded for it. But things have turned out

even better than I hoped.'

Yet until relatively recently,

this level of success would

have seemed just as fanciful

as Cartmel being spoken of

in the same breath as other

ago, I was changing things so

much you never knew which

L'Enclume you were coming to,'

a Greek phase or a Japanese

phase. The menu didn't even

but a lot of people mistook that

for me being arrogant.'

were the apogee of Ferran

Adrià and elBulli's fame, and

by the technology and cooking

techniques coming out of

and elsewhere. 'I was insecure

and I wasn't happy with myself,'

Rogan admits, referring to 'the

friends in the restaurant world

with a complaint of how hard it is to get

to - especially for London-based restaurant

critics. 'In the beginning our location was

turned that geographical isolation on its head

and our location is everything. We are heavily

linked to our surroundings and our ethos is

all about being natural.'

Around the same time as the change of

'In life you can only do what you're

good at, and you hope that maybe

one day you'll get rewarded for it'