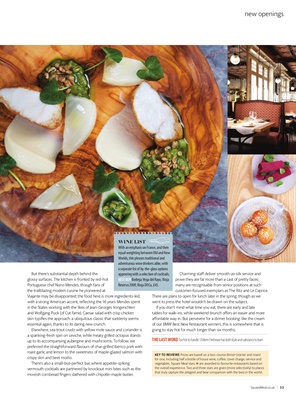 But there's substantial depth behind the

glossy surfaces. The kitchen is fronted by red-hot

the trailblazing modern cuisine he pioneered at

Viajante may be disappointed: the food here is more ingredients-led,

with a strong American accent, reecting the 16 years Mendes spent

in the States working with the likes of Jean-Georges Vongerichten

skin typies the approach: a ubiquitous classic that suddenly seems

essential again, thanks to its daring new crunch.

a spanking-fresh spin on ceviche, while meaty grilled octopus stands

up to its accompanying aubergine and mushrooms. To follow, we

preferred the straightforward avours of char-grilled Ibérico pork with

vermouth cocktails are partnered by knockout mini bites such as the

prove they are far more than a cast of pretty faces;

many are recognisable from senior positions at such

customer-focused exemplars as The Ritz and Le Caprice.

There are plans to open for lunch later in the spring, though as we

went to press the hotel wouldn't be drawn on the subject.

If you don't mind what time you eat, there are early and late

tables for walk-ins, while weekend brunch oers an easier and more

aordable way in. But persevere for a dinner booking: like the cream

of our BMW Best New Restaurant winners, this is somewhere that is

going to stay hot for much longer than six months.

THE LAST WORD Too hot to handle: Chiltern Firehouse has both style and substance to burn

With an emphasis on France, and then

equal weighting between Old and New

Worlds, this pleases traditional and

appearing with a selection of cocktails.