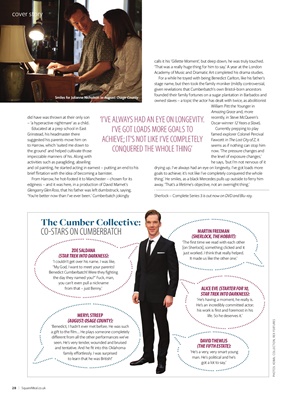 did have was thrown at their only son

- 'a hyperactive nightmare' as a child.

Educated at a prep school in East

Grinstead, his headmaster there

suggested his parents move him on

to Harrow, which 'suited me down to

the ground' and helped cultivate those

impeccable manners of his. Along with

activities such as paragliding, abseiling

and oil painting, he started acting in earnest - putting an end to his

brief irtation with the idea of becoming a barrister.

From Harrow, he hot-footed it to Manchester - chosen for its

edginess - and it was here, in a production of David Mamet's

Glengarry Glen Ross, that his father was left dumbstruck, saying,

'You're better now than I've ever been.' Cumberbatch jokingly

'Benedict, I hadn't ever met before. He was such

a gift to the lm… He plays someone completely

di¡erent from all the other performances we've

and tentative. And he t into this Oklahoma

family e¡ortlessly. I was surprised

to learn that he was British!'

'The rst time we read with each other

[on Sherlock], something clicked and it

'He's having a moment, he really is.

his work is rst and foremost in his

life. So he deserves it.'

calls it his 'Gillette Moment', but deep down, he was truly touched.

'That was a really huge thing for him to say.' A year at the London

Academy of Music and Dramatic Art completed his drama studies.

For a while he toyed with being Benedict Carlton, like his father's

stage name, but then took the family moniker (mildly controversial,

given revelations that Cumberbatch's own Bristol-born ancestors

founded their family fortunes on a sugar plantation in Barbados and

owned slaves - a topic the actor has dealt with twice, as abolitionist

William Pitt the Younger in

Fawcett in The Lost City of Z, it

seems as if nothing can stop him

now. 'The pressure changes and

the level of exposure changes,'

he says, 'but I'm not nervous of it

drying up. I've always had an eye on longevity. I've got loads more

goals to achieve; it's not like I've completely conquered the whole

thing.' He smiles, as a black Mercedes pulls up outside to ferry him

away. 'That's a lifetime's objective, not an overnight thing.'

Sherlock - Complete Series 3 is out now on DVD and Blu-ray.

'I couldn't get over his name. I was like,

"My God, I want to meet your parents!

Benedict Cumberbatch! Were they ghting

the day they named you?" Fuck, man,

you can't even pull a nickname

from that - just Benny.'

'I'VE ALWAYS HAD AN EYE ON LONGEVITY.

I'VE GOT LOADS MORE GOALS TO