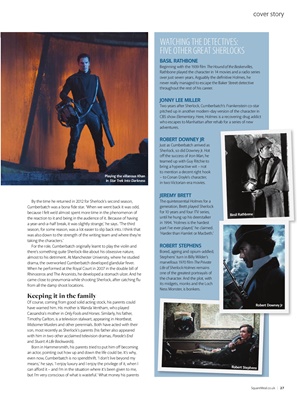 By the time he returned in 2012 for Sherlock's second season,

Cumberbatch was a bona  de star. 'When we went back it was odd,

the reaction to it and being in the audience of it. Because of having

a year-and-a-half break, it was slightly strange,' he says. 'The third

season, for some reason, was a lot easier to slip back into. I think that

For the role, Cumberbatch originally learnt to play the violin and

there's something quite Sherlock-like about his obsessive nature,

almost to his detriment. At Manchester University, where he studied

Rhinoceros and The Arsonists, he developed a stomach ulcer. And he

came close to pneumonia while shooting Sherlock, after catching  u

from all the damp shoot locations.

Keeping it in the family

Of course, coming from good solid acting stock, his parents could

have warned him. His mother is Wanda Ventham, who played

Cassandra's mother in Only Fools and Horses. Similarly, his father,

Timothy Carlton, is a television stalwart, appearing in Heartbeat,

Midsomer Murders and other perennials. Both have acted with their

son, most recently as Sherlock's parents (his father also appeared

with him in two other acclaimed television dramas, Parade's End

and Stuart: A Life Backwards).

Born in Hammersmith, his parents tried to put him o¡ becoming

an actor, pointing out how up and down the life could be. It's why,

even now, Cumberbatch is no spendthrift. 'I don't live beyond my

means,' he says. 'I enjoy luxury and I enjoy the privilege of it, when I

can a¡ ord it - and I'm in the situation where it's been given to me,

but I'm very conscious of what is wasteful.' What money his parents

Beginning with the 1939  lm The Hound of the Baskervilles,

Rathbone played the character in 14 movies and a radio series

over just seven years. Arguably the de nitive Holmes, he

throughout the rest of his career.

pitched up in another modern-day version of the character in

who escapes to Manhattan after rehab for a series of new

Just as Cumberbatch arrived as

Sherlock, so did Downey Jr. Hot

o¡ the success of Iron Man, he

teamed up with Guy Ritchie to

bring a hyperactive wit - not

to mention a decent right hook

The quintessential Holmes for a

for 10 years and four ITV series,

until he hung up his deerstalker

part I've ever played,' he claimed.

'Harder than Hamlet or Macbeth.'

one of the greatest portrayals of

the character. And the plot, with

its midgets, monks and the Loch

in Star Trek Into Darkness