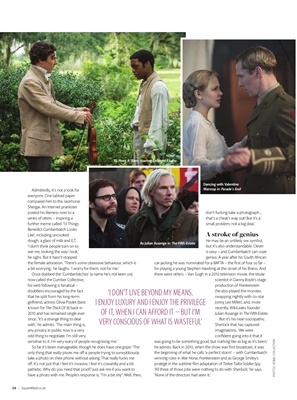 Admittedly, it's not a look for

everyone. One tabloid paper

compared him to the racehorse

posted his likeness next to a

series of otters - inspiring a

dough, a glass of milk and E.T.

'I don't think people turn on to

see me, looking the way I look,'

he sighs. But it hasn't stopped

the female adoration. 'There's some obsessive behaviour, which is

Once dubbed the 'Cumberbitches' (a name he's not keen on),

his web following is fanatical -

doubtless encouraged by the fact

that he split from his long-term

known for The Thick Of It) back in

2010 and has remained single ever

since. 'It's a strange thing to deal

with,' he admits. 'The main thing is,

sensitive to it. I'm very wary of people recognising me.'

So far it's been manageable, though he does have one gripe: 'The

take a photo on their phone without asking. That really fucks me

pathetic. Why do you need that proof? Just ask me if you want to

small problem, not a big deal.'

A stroke of genius

He may be an unlikely sex symbol,

but it's also understandable. Clever

is sexy - and Cumberbatch can ooze

genius. A year after his South African

for playing a young Stephen Hawking at the onset of his illness. And

there were others - Van Gogh in a 2010 television movie, the titular

(he also played the monster,

Julian Assange in The Fifth Estate.

Sherlock that has captured

condent going into it that it

was going to be something good, but nothing like as big as it's been,'

the beginning of what he calls 'a perfect storm' - with Cumberbatch

winning roles in War Horse, Frankenstein and as George Smiley's

'All three of those jobs were nothing to do with Sherlock,' he says.

'None of the directors had seen it.'

'I DON'T LIVE BEYOND MY MEANS.

I ENJOY LUXURY AND I ENJOY THE PRIVILEGE

VERY CONSCIOUS OF WHAT IS WASTEFUL'Dancing with Valentine

As Julian Assange in The Fifth Estate