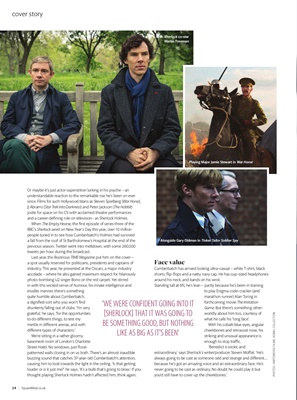 shorts, ip-ops and a natty navy cap. He has cup-sized headphones

around his neck, and bands on his wrist.

Standing tall at 6ft, he's lean - partly because he's been in training

to play Enigma code-cracker (and

Game. But there's something otherworldly

about him too, courtesy of

what he calls his 'long face'.

With his cobalt-blue eyes, angular

cheekbones and retroussé nose, his

striking and unusual appearance is

'Benedict is exotic and

because he's got an amazing voice and an extraordinary face. He's

never going to be cast as ordinary. No doubt he could play it but

you'd still have to cover up the cheekbones.'

Or maybe it's just actor-superstition lurking in his psyche - an

understandable reaction to the remarkable rise he's been on ever

since. Films for such Hollywood titans as Steven Spielberg (War Horse),

jostle for space on his CV with acclaimed theatre performances

and a career-dening role on television- as Sherlock Holmes.

When The Empty Hearse, the rst episode of series three of the

people tuned in to see how Cumberbatch's Holmes had survived

tweets per hour during the broadcast.

Last year, the illustrious TIME Magazine put him on the cover -

a spot usually reserved for politicians, presidents and captains of

industry. This year, he presented at the Oscars, a major industry

accolade - where he also gained maximum respect for hilariously

photo-bombing U2 singer Bono on the red carpet. Yet stirred

in with this wicked sense of humour, his innate intelligence and

quite humble about Cumberbatch,

a dignied sort who you won't nd

grateful,' he says, 'for the opportunities

to do di¡erent things, to test my

mettle in di¡erent arenas, and with

We're sitting in a rather gloomy

walls closing in on us both. There's an almost inaudible

causing him to look towards the light in the ceiling. 'Is that getting

'WE WERE CONFIDENT GOING INTO IT

�SHERLOCK� THAT IT WAS GOING TO

BE SOMETHING GOOD, BUT NOTHING