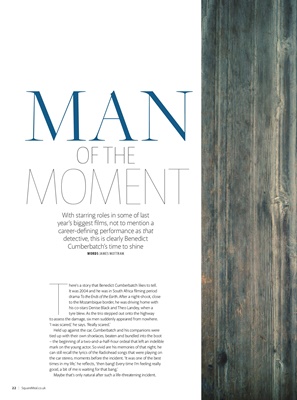 22 | squaremeal.co.uk There's a story that Benedict Cumberbatch likes to tell.

It was 2004 and he was in South Africa lming period

drama To the Ends of the Earth. After a night-shoot, close

to the Mozambique border, he was driving home with

his co-stars Denise Black and Theo Landey, when a

tyre blew. As the trio stepped out onto the highway

to assess the damage, six men suddenly appeared from nowhere.

Held up against the car, Cumberbatch and his companions were

tied up with their own shoelaces, beaten and bundled into the boot

mark on the young actor. So vivid are his memories of that night, he

the car stereo, moments before the incident. 'It was one of the best

times in my life,' he reects, 'then bang! Every time I'm feeling really

good, a bit of me is waiting for that bang.'

Maybe that's only natural after such a life-threatening incident.

With starring roles in some of last

lms, not to mention a

ning performance as that

detective, this is clearly Benedict