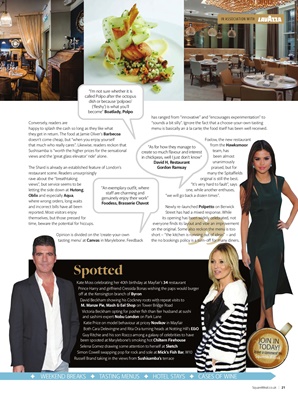 has ranged from "innovative" and "encourages experimentation" to

"sounds a bit silly". Ignore the fact that a choose-your-own tasting

menu is basically an à la carte; the food itself has been well received.

many the Spital¡ elds

original is still the best.

"It's very hard to fault", says

one, while another enthuses,

"we will go back a dozen times".

Street has had a mixed response. While

its opening has been widely celebrated, not

everyone ¡ nds its layout and vibe an improvement

on the original. Some also reckon the menu is too

short - "the kitchen is running out of ideas" - and

the no bookings policy is a turn-o for many diners.

happy to splash the cash so long as they like what

they get in return. The food at Jamie Oliver's Barbecoa

doesn't come cheap, but "when you enjoy yourself

that much who really cares". Likewise, readers reckon that

Sushisamba is "worth the higher prices for the sensational

The Shard is already an established feature of London's

rave about the "breathtaking

views", but service seems to be

letting the side down at Hutong,

and incorrect bills have all been

themselves, but those pressed for

time, beware the potential for hiccups.

Opinion is divided on the 'create-your-own

"I'm not sure whether it is

called Polpo after the octopus

"As for how they manage to

create so much flavour and interest

"An exemplary outfit, where

staff are charming and

o  a t the Kensington branch of Byron

David Beckham showing his Cockney roots with repeat visits to

Victoria Beckham opting for posher ¡ sh than her husband at sushi

Katie Price on model behaviour at pricey Novikov in Mayfair

Selena Gomez drawing some attention to herself at Sketch

Russell Brand taking in the views from Sushisamba's terrace