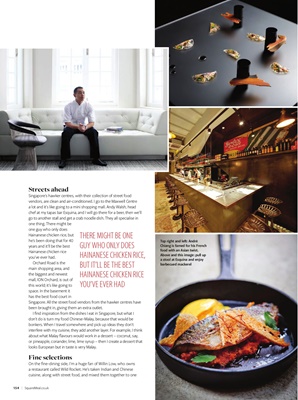 Singapore's hawker centres, with their collection of street food

vendors, are clean and air-conditioned. I go to the Maxwell Centre

a lot and it's like going to a mini shopping mall. Andy Walsh, head

chef at my tapas bar Esquina, and I will go there for a beer, then we'll

go to another stall and get a crab noodle dish. They all specialise in

one guy who only does

he's been doing that for 40

years and it'll be the best

Orchard Road is the

the biggest and newest

mall, ION Orchard, is out of

space. In the basement it

has the best food court in

Singapore. All the street food vendors from the hawker centres have

been brought in, giving them an extra outlet.

I nd inspiration from the dishes I eat in Singapore, but what I

don't do is turn my food Chinese-Malay, because that would be

bonkers. When I travel somewhere and pick up ideas they don't

interfere with my cuisine, they add another layer. For example, I think

about what Malay avours would work in a dessert - coconut, say,

or pineapple, coriander, lime, lime syrup - then I create a dessert that

looks European but in taste is very Malay.

On the ne-dining side, I'm a huge fan of Willin Low, who owns

cuisine, along with street food, and mixed them together to one

GUY WHO ONLY DOES

BUT IT'LL BE THE BEST

Chiang is famed for his French

food with an Asian twist.

Above and this image: pull up

a stool at Esquina and enjoy