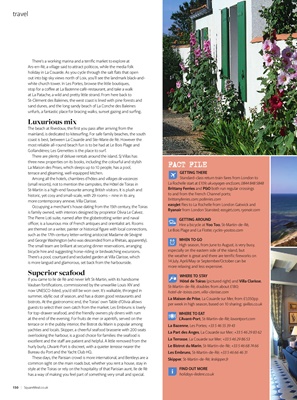 Ars-en-Ré, a village said to attract politicos, while the media folk

holiday in La Couarde. As you cycle through the salt   ats that open

out into big-sky views north of Loix, you'll see the landmark black-andwhite

stop for a co ee at La Bazenne café-restaurant, and take a walk

at La Patache, a wild and pretty little strand. From here back to

St-Clément des Baleines, the west coast is lined with pine forests and

The beach at Rivedoux, the  rst you pass after arriving from the

mainland, is dedicated to kitesur ng. For safe family beaches, the south

coast is best, between La Couarde and Ste-Marie de Ré. However the

There are plenty of deluxe rentals around the island. SJ Villas has

three new properties on its books, including the colourful and stylish

La Maison des Prises, which sleeps up to 10 people, has a pool,

Among all the hotels, chambres d'hôtes and villages de vacances

(small resorts), not to mention the campsites, the Hôtel de Toiras in

St-Martin is a high-end favourite among British visitors. It is plush and

historic, yet cosy and small-scale, with 29 rooms - nine in its airy,

Occupying a merchant's house dating from the 15th century, the Toiras

The Pierre Loti suite, named after the globetrotting writer and naval

o¤ cer, is a luxurious mix of French antiques and orientalist art. Rooms

are themed on a writer, painter or historical  gure with local connections,

such as the 17th-century letter-writing aristocrat Madame de Sévigné

and George Washington (who was descended from a Rhétais, apparently).

The small team are brilliant at securing dinner reservations, arranging

There's a pool, courtyard and secluded garden at Villa Clarisse, which

is more languid and glamorous, set back from the harbourside.

If you came to Ile de Ré and never left St-Martin, with its handsome

Vauban forti cations, commissioned by the unwarlike Louis XIV and

now UNESCO-listed, you'd still be won over. It's walkable, thronged in

summer, idyllic out of season, and has a dozen good restaurants and

bistrots. At the gastronomic end, the Toiras' own Table d'Olivia allows

guests to select their own catch from the market. Les Embruns is lovely

for top-drawer seafood, and the friendly owners ply diners with rum

at the end of the evening. For fruits de mer or apéritifs, served on the

terrace or in the pubby interior, the Bistrot du Marin is popular among

yachties and locals. Skipper, a cheerful seafood brasserie with 200 seats

overlooking the harbour, is a good choice for families: the seafood is

excellent and the sta are patient and helpful. A little removed from the

hurly burly, L'Avant-Port is discreet, with a quieter terrasse nearer the

These days, the Parisian crowd is more international, and Bentleys are a

common sight on the main roads but, whether you rent a house, stay in

style at the Toiras or rely on the hospitality of that Parisian aunt, Ile de Ré

has a way of making you feel part of something very small and special.

to and from the French Channel ports;

easyJet flies to La Rochelle from London Gatwick and

Hire a bicycle at Yoo Too, St-Martin-de-Ré,

High season, from June to August, is very busy,

especially on the eastern side of the island, but

the weather is great and there are terrific fireworks on

14 July. April/May or September/October can be

per week in high season, based on 10 sharing; sjvillas.co.uk