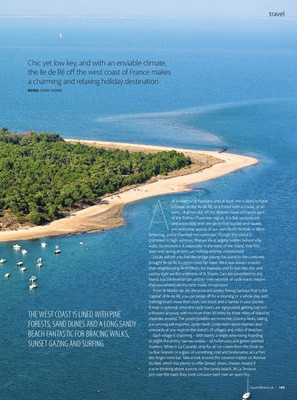 Ask a roomful of Parisians, and at least one is likely to have

a house on the Ile de Ré, or a friend with a house, or an

of the Poitou-Charentes region, it is  at, uncluttered

pre-industrial appeal of our own North Norfolk or West

Wittering, and a charmed microclimate. Though the island is

walls. So discreet is it, especially in the west of the island, that lm

brought Ile de Ré its upper-crust fan base. Yet it was always smarter

than neighbouring Ile d'Oléron, for example, and its low-key chic and

yachty style are the antithesis of St Tropez. Cars are permitted on the

island, but the level terrain and 60-mile network of cycle tracks means

that two wheels are the best mode of transport.

'capital' of Ile de Ré, you can pedal o for a morning or a whole day, with

nothing much more than cash, sun block and a hankie in your pocket.

A map is optional, since the cycle tracks are signposted; getting lost isn't

a disaster, anyway, with no more than 20 miles by three miles of island to

meander around. The pistes cyclables are more like country lanes, taking

you among salt marshes, oyster beds, protected nature reserves and

vineyards as you explore the island's 10 villages and miles of beaches.

Each village is charming - with barely a single advertising hoarding

to blight the pretty, narrow streets - all hollyhocks and green-painted

shutters. While in La Couarde, stop for an ice cream from the kiosk on

La Rue Grande, or a glass of something cold and biodynamic at La Part

des Anges wine bar. Take a look around the covered market on Avenue

du Mail, which has plenty to oer (bread, olives, cheese, meats) if

you're thinking about a picnic on the sandy beach. At La Terrasse,

just over the road, they cook Limousin beef over an open re.

Chic yet low key, and with an enviable climate,

a charming and relaxing holiday destination

THE WEST COAST IS LINED WITH PINE