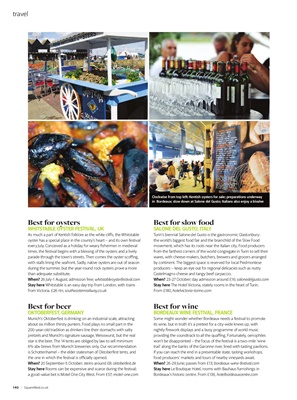 As much a part of Kentish folklore as the white clis, the Whitstable

every July. Conceived as a holiday for weary shermen in medieval

times, the festival begins with a blessing of the oysters and a lively

parade through the town's streets. Then comes the oyster sco¤ng,

with stalls lining the seafront. Sadly, native oysters are out of season

during the summer, but the year-round rock oysters prove a more

Stay here Whitstable is an easy day trip from London, with trains

Munich's Oktoberfest is drinking on an industrial scale, attracting

about six million thirsty punters. Food plays no small part in the

200-year-old tradition as drinkers line their stomachs with salty

pretzels and Munich's signature sausage, Weisswurst, but the real

star is the beer. The 14 tents are obliged by law to sell minimum

6% abv brews from Munich breweries only. Our recommendation

is Schottenhamel - the elder statesman of Oktoberfest tents, and

the one in which the festival is o¤cially opened.

When? 20 September-5 October; steins around £8; oktoberfest.de

Stay here Rooms can be expensive and scarce during the festival;

a good-value bet is Motel One City West. From £57; motel-one.com

movement, which has its roots near the Italian city. Food producers

by continent. The biggest space is reserved for local Piedmontese

producers - keep an eye out for regional delicacies such as nutty

When? 23-27 October; day admission around £16; salonedelgusto.com

Stay here The Hotel Victoria, stately rooms in the heart of Turin.

Some might wonder whether Bordeaux needs a festival to promote

its wine, but in truth it's a pretext for a city-wide knees up, with

nightly rework displays and a busy programme of world music

providing the soundtrack to all the qua¤ng. Fortunately, oenophiles

trail' along the banks of the Garonne river, lined with tasting pavilions.

If you can reach the end in a presentable state, tasting workshops,

food producers' markets and tours of nearby vineyards await.

in Bordeaux; slow down at Salone del Gusto; Italians also enjoy a bivalve