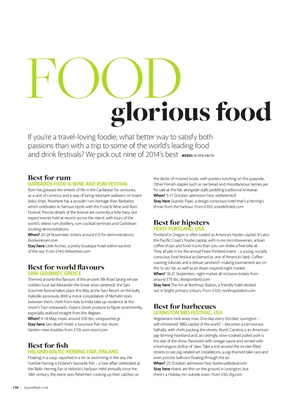 Rum has greased the wheels of life in the Caribbean for centuries,

leaky ships. Nowhere has a prouder rum heritage than Barbados,

which celebrates its famous tipple with the Food  Wine and Rum

Festival. Precise details of the festival are currently a little hazy, but

expect events held at resorts across the island, with tours of the

When? 20-24 November; tickets around £15 for demonstrations;

Themed around the avours of the ancient Silk Road (along whose

cobbles local lad Alexander the Great once cantered), the Sani

Halkidiki peninsula. With a minor constellation of Michelin stars

between them, chefs from Italy to India take up residence at the

especially seafood straight from the Aegean.

Floating in a soup, squished in a tin or swimming in the sea, the

the Baltic Herring Fair in Helsinki's harbour. Held annually since the

18th century, the event sees shermen cooking up their catches on

the decks of moored boats, with punters lunching on the quayside.

Other Finnish staples such as rye bread and miscellaneous berries are

for sale at the fair, alongside stalls peddling traditional knitwear.

throw from the harbour. From £100; scandichotels.com

Portland in Oregon is often touted as America's hipster capital. It's also

coee shops and food trucks than you can shake a xie bike at.

They all pile in for the annual Feast Portland event - a young, socially

conscious food festival acclaimed as one of America's best. Coeeroasting

tutorials and a deluxe sandwich-making tournament are on

the 'to do' list, as well as an Asian-inspired night market.

out in bright primary colours. From £100; northrupstation.com

Vegetarians look away now. One day every October, Lexington -

self-christened 'BBQ capital of the world' - becomes a carnivorous

Valhalla, with chefs packing the streets. North Carolina is an American

the star of the show, avoured with vinegar sauce and served with

a humongous dollop of 'slaw. Take a trot around the smoke-lled

even porcine balloons oating through the air.

Stay here Hotels are thin on the ground in Lexington, but

there's a Holiday Inn outside town. From £50; ihg.com

If you're a travel-loving foodie, what better way to satisfy both

and drink festivals? We pick out nine of 2014's best WORDS OLIVER SMITH