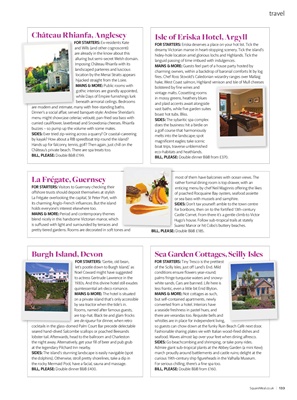 FOR STARTERS: Visitors to Guernsey checking their

offshore trusts should deposit themselves at stylish

its charming Anglo-French influences. But the island

blend nicely in this handsome Victorian manor, which

is suffused with light and surrounded by terraces and

pretty tiered gardens. Rooms are decorated in soft tones and

most of them have balconies with ocean views. The

rather formal dining room is top drawer, with an

or sea bass with mussels and samphire.

SIDES: Don't tax yourself: amble to the town centre

for bonbons, then on to the fortified 13th-century

Castle Cornet. From there it's a gentle climb to Victor

let's pootle down to Burgh Island,' as

to actress Gertrude Lawrence in the

on a private island that's only accessible

by sea tractor when the tide's in.

are de rigueur for dinner, when retro

lobster tail. Afterwards, head to the ballroom and Charleston

the night away. Alternatively, get your fill of beer and pub grub

at the legendary Pilchard Inn nearby.

the dolphins). Otherwise, stroll pretty shorelines, take a dip in

the rocky Mermaid Pool, have a facial, sauna and massage.

FOR STARTERS: Tiny Tresco is the prettiest

of the Scilly Isles, just off Land's End. Mild

MAINS  MORE: Not cottages as such,

converted from a hotel. Interiors have

a seaside freshness in pastel hues, and

there are verandas too. Requisite bells and

whistles are in place for independent living,

so guests can chow down at the funky Ruin Beach Café next door.

seafood. Waves almost lap over your feet when dining alfresco.

march proudly around battlements and castle ruins; delight at the

For serious chilling, there's a fine spa too.

FOR STARTERS: Eriska deserves a place on your hot list. Tick the

hidey-hole location amid glorious lochs and Highlands. Tick the

charming owners, within a backdrop of baronial comforts lit by log

bolstered by fine wines and

and plaid accents await alongside

does the business: hit a birdie on

a golf course that harmoniously

melts into the landscape; spot

and Wills (and other cognoscenti)

are already in the know about this

Imposing Château Rhianfa with its

location by the Menai Straits appears

hijacked straight from the Loire.

while Days of Empire furnishings lurk

are modern and intimate, many with free-standing baths.

buzzes - so pump up the volume with some mates.

by kayak? How about a RIB speedboat trip round the island?

Hands up for falconry, tennis, golf? Then again, just chill on the

Château's private beach. There are spa treats too.

and Wills (and other cognoscenti)

are already in the know about this

Imposing Château Rhianfa with its

are modern and intimate, many with free-standing baths.

pretty tiered gardens. Rooms are decorated in soft tones and

on a private island that's only accessible