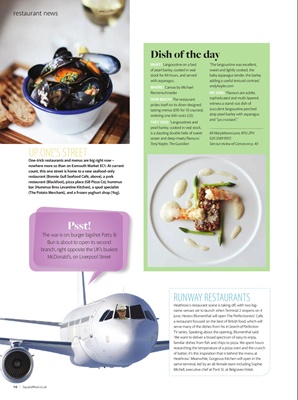 WHAT? Langoustine on a bed

of pearl barley, cooked in veal

stock for 84 hours, and served

WHERE? Canvas by Michael

HOW MUCH? The restaurant

prides itself on its diner-designed

THEY SAID: 'Langoustines and

is a dazzling double helix of sweet

'The langoustine was excellent,

sweet and lightly cooked, the

WE SAID: 'Flavours are subtle,

witness a stand-out dish of

atop pearl barley with asparagus

The war is on: burger bigshot Patty 

Bun is about to open its second

branch, right opposite the UK's busiest

venues set to launch when Terminal 2 reopens on 4

a restaurant focused on the best of British food, which will

serve many of the dishes from his In Search of Perfection

'We want to deliver a broad spectrum of easy to enjoy,

familiar dishes from ­ sh and chips to pizza. We spent hours

researching the temperature of a pizza oven and the crunch

of batter; it's this inspiration that is behind the menu at

Heathrow.' Meanwhile, Gorgeous Kitchen will open in the

same terminal, led by an all-female team including Sophie

UP ONE'S STREETOne-trick restaurants and menus are big right now -

nowhere more so than on Exmouth Market EC1. At current

count, this one street is home to a new seafood-only

(The Potato Merchant), and a frozen yoghurt shop (Yog).